Can you find all the items in these puzzles? Click on an image to enlarge it for a closer look! 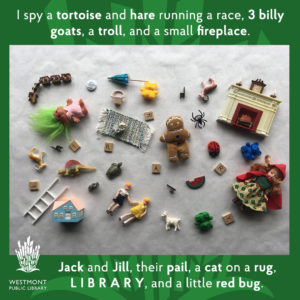 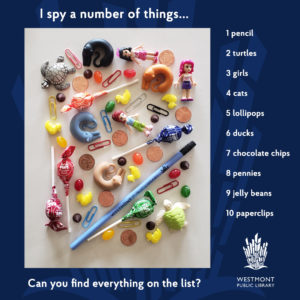 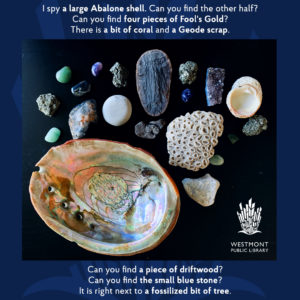 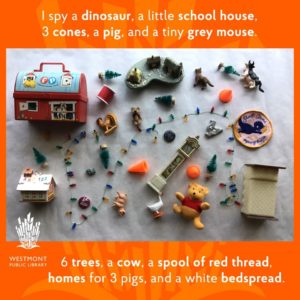 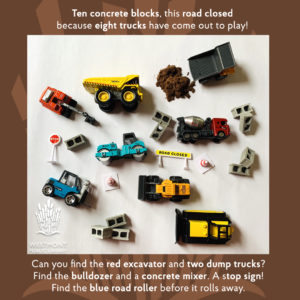 I Spy #5: I spy ten concrete blocks, this Road Closed, because eight trucks have come out to play! Can you find the red excavator? Two dump trucks? Find the bulldozer and concrete mixer. Stop sign! A blue road roller, find it before it rolls away. 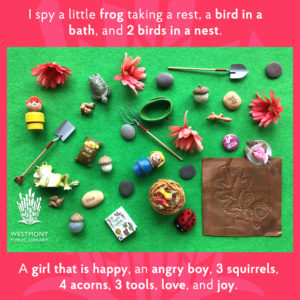 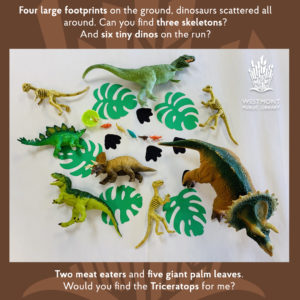 I Spy #7: I spy four large footprints on the ground, dinosaurs scattered all around. Can you find three skeletons and six tiny dinos on the run? Two meat eaters and five giant palm leaves. Would you find the triceratops for me? 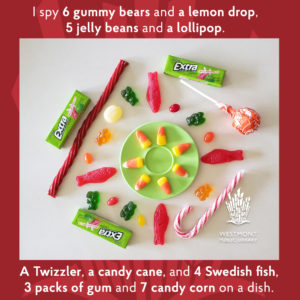 I Spy #8: I spy 6 gummy bears and a lemon drop, 5 jelly beans and a lollipop. A Twizzler, a candy cane, and four Swedish fish, 3 packs of gum, and 7 candy corn on a dish. 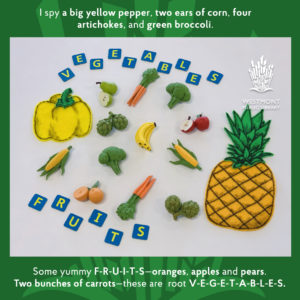 I Spy #9: I spy a big yellow pepper and two ears of corn, four artichokes, and green broccoli. Some yummy F-R-U-I-T-S—apples, oranges, and pears. Two bunches of carrots—these are root V-E-G-E-T-A-B-L-E-S. 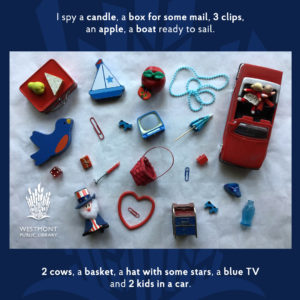 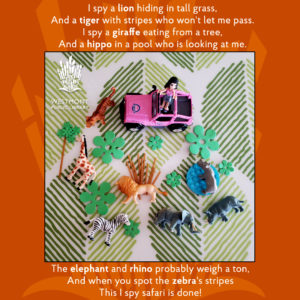 I Spy #11: I spy a lion hiding in tall grass… and a tiger with stripes who won’t let me pass. I spy a giraffe eating from a tree… and a hippo in a pool who is looking at me. The elephant and rhino probably weigh a ton. And when you spot the zebra’s stripes, this I Spy safari is done! 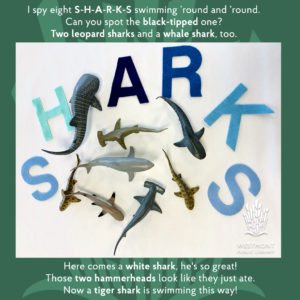 I Spy #12: I spy eight S-H-A-R-K-S, swimming ’round and ’round. Can you spot the black-tipped one? Two leopard sharks and a whale shark, too. Here comes a white shark, he’s so great! Those two hammerheads look like they just ate. And now a tiger shark is swimming this way. 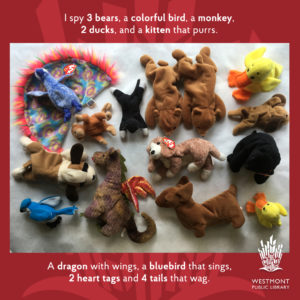 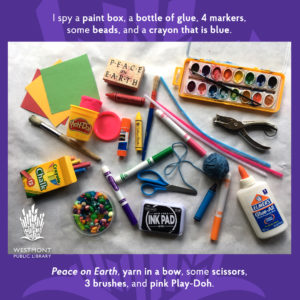 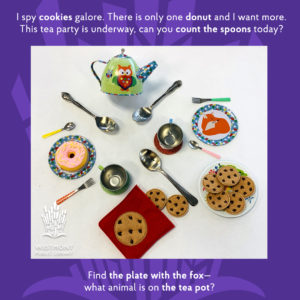 I Spy #15: I spy cookies galore. There is only one donut and I want more. This tea party is underway, can you count the spoons today? Find the plate with the fox. What animal is on the tea pot? 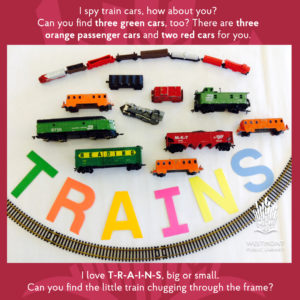 I Spy #16: I spy train cars, how about you? Can you find three green cars, too? There are three orange passenger cars and two red cars for you. I love T-R-A-I-N-S, big or small. Can you find the little train, chugging through the frame? 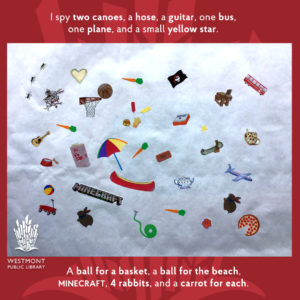 I Spy #17: I spy two canoes, a hose, a guitar, one bus, one plane, and a small yellow star. A ball for a basket, a ball for the beach, MINECRAFT, 4 rabbits, and a carrot for each. 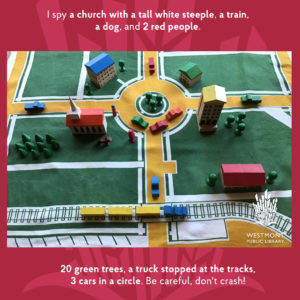 I Spy #18: I spy a church with a tall white steeple, a train, a dog, and two red people. 20 green trees, a truck stopped at the tracks, 3 cars in a circle. Be careful, don’t crash. 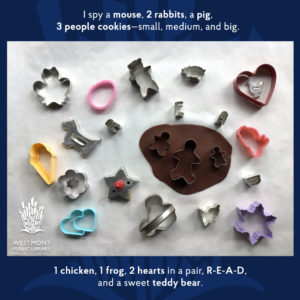 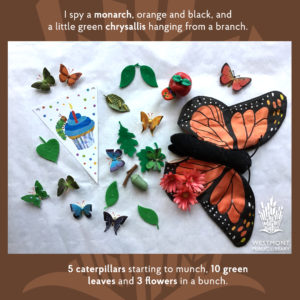 I Spy #20: I spy a monarch, orange and black, and a little green chrysallis hanging from a branch. 5 caterpillars starting to munch, 10 green leaves and 3 flowers in a bunch. 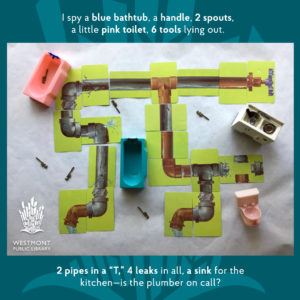 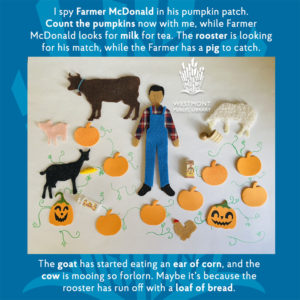 I Spy #22: I spy farmer McDonald in his pumpkin patch. Count the pumkins now with me, while farmer McDonalds looks for the milk for tea. The rooster is looking for his match, while the farmer has a pig to catch. The goat has started eating an ear of corn, and the cow is mooing so forlorn. Maybe its because the rooster has run off with a loaf of bread. 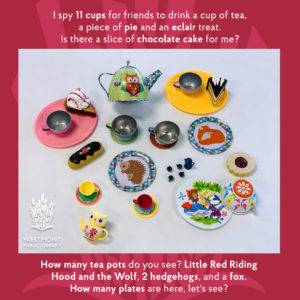 I Spy #23: I spy 11 cups for friends to drink a cup of tea, a piece of pie and an eclair treat. Is there a slice of chocolate cake for me? How many tea pots do you see? Little Red Riding Hood and the Wolf, 2 hedgehogs, and a fox. How many plates are here, let’s see? 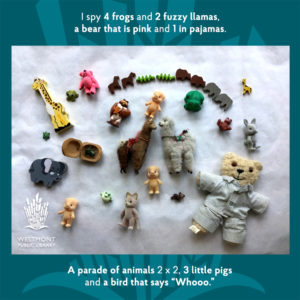 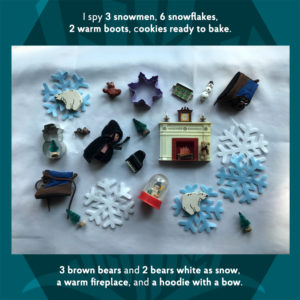 I Spy #25: I spy 3 snowmen, 6 snowflakes, 2 warm boots, cookies ready to bake. 3 brown bears and 2 bears white as snow, and warm fireplace, and a hoodie with a bow. 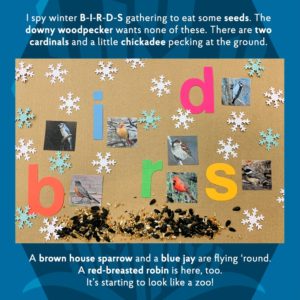 I Spy #26: I spy winter B-I-R-D-S gathering to eat some seeds. The downy woodpecker wants none of these. There are two cardinals and a little chickadee pecking at the ground. A brown house sparrow and a blue jay are flying ’round. A red-breasted robin is here, too. It’s starting to look like a zoo! 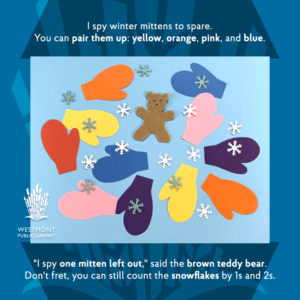 I Spy #27: I spy winter mittens to spare. You can pair them up: yellow, orange, pink, and blue. “I spy one mitten left out,” said the brown teddy bear. Don’t fret, you can still count the snowflakes by 1s and 2s.

Request items through the online catalog, then pick them up outside the Library entrance.