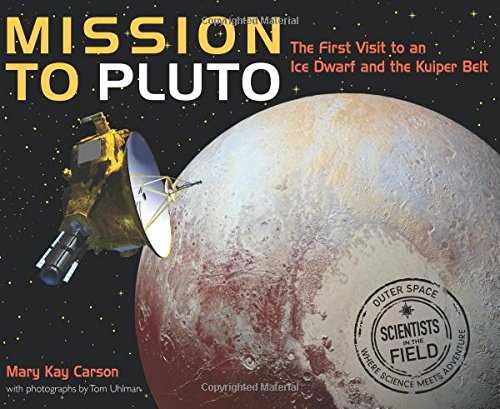 It was plutonium that powered New Horizons to Pluto, giving us the first up-close look at the much-debated, much-loved icy dwarf planet. Mission to Pluto is an enthusiastic, in-depth account of the New Horizons spacecraft, the team behind it, its historic journey, and astonishing discoveries. There are a plethora of charts, diagrams, maps and trajectories to dig into, as well as many of the gorgeous pictures taken by New Horizons during its flyby back in 2015. The chapters, each designated as a “mission brief” make you feel a part of the action, from the discovery of Pluto back in 1930, to a few surprise moons, and the exploration of the Kuiper Belt coming up in 2019. This is a must read for all adventure and space lovers, grades 4 and up, of a mission that will no doubt play a part in inspiring a new generation of space scientists, as the Voyager missions and moon landing did before it. Appetites will be whet, curiosity satisfied, and those of us old enough to remember when Pluto was reclassified to a more dubious planetary status will no doubt be relieved to hear that one of the main scientists on the New Horizons team still considers Pluto a planet. This insider’s peek into NASA has a little suspense, a lot of excitement, and shows what is possible with a lot of hard work and big dreams. The only question that remains is, what next?