The Story Of Owen : Dragon Slayer Of Trondheim 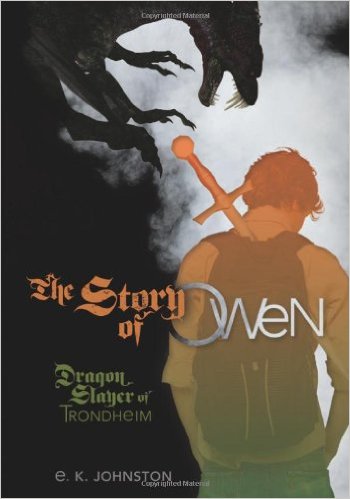 Imagine a world much like our own with just one key difference:  the existence of dragons. The dragons in Johnston’s world are fierce, dim-witted creatures with an insatiable appetite for fossil fuels that humans are so adept at producing. In fact, in this alternate history, the state of Michigan was completely evacuated soon after Henry Ford was eaten by a dragon and Michigan went up in flames. Due to the high carbon emissions in areas of dense population, most dragon slayers are sent to big cities, leaving small towns on their own.

Fortunately for Trondheim, a rural Canadian town, Owen’s dragon slayer family has moved in. Owen is a high school student who has recently begun intense training since his legendary dragon slayer aunt suffered serious work related injuries. Siobhan, a fellow student, becomes his good friend, his algebra tutor, and his bard, tasked with spreading the tales of his adventures in dragon slaying.

While it was the idea of an alternate history that encouraged me to pick up this book, it was Siobhan’s wry voice that kept me reading. I also appreciated that Owen, despite his famous aunt and heroic calling, is a really normal teenager. He is slightly awkward and shy and needs a tutor to help him with math. He comes from a loving, though unconventional family. He can be headed straight into a dangerous encounter with a dragon yet also be worried about whether or not he should ask a girl out.

This is a truly original story with elements of adventure and fantasy, yet it is also so real. The relationships between the characters are authentic and deep. People are the heart of this story. Dragons are a bonus.