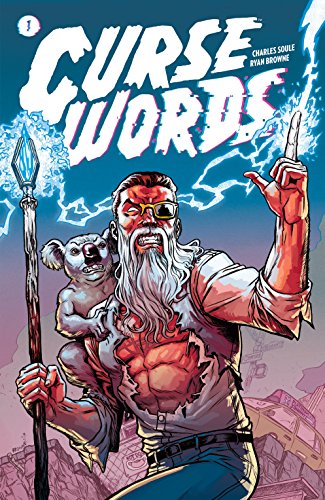 An evil wizard (named Wizord) is sent from an awful neighboring dimension to destroy our world. But once he gets here, he kinda likes the place so he decides to just stay instead. He hangs out a shingle and starts doing magical services for people, alongside his familiar Margaret who is a koala. He isn’t really evil anymore, but he isn’t exactly good either. He’s just kind of a dick.

But his old master hasn’t forgotten about him, not by a long shot.

Curse Words is a weird comic. It’s definitely comedic, not just in the That’s so stupid way but also in bizarre and sometimes surrealistic ways as well. From the fairly simple premise stated above, the comic spirals out in a lot of directions and by the end has grown significantly more complex in several surprising ways.

The art is really strong and imaginative and really supports not only the humor but also the grotesque and surreal elements as well.