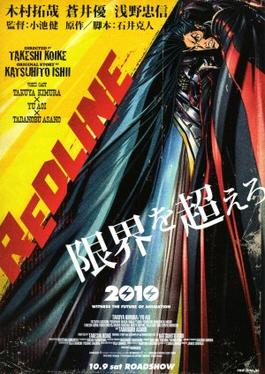 That’s not what the movie’s about though. That’s just something that happens for a little bit before we get back to the race.

Because Redline is, ostensibly, a racing movie. JP is a race car driver who’s been to jail for throwing races and whose mechanic is caught up with the mob. He’d just about managed to win the qualifying race to get to the big show when his mechanic detonates a bomb on his car, causing him to lose.

However, he manages to get into the big race anyway. And then things start to get really crazy.

Redline is a movie that is bursting at the seams with all sorts of bizarre, wildly imaginative, over the top stuff. The pace lags a bit between the two big races but the movie isn’t long and there’s always interesting stuff onscreen. It can be a little difficult to follow what’s going on with the hyper kinetic animation and editing style, but only in spots.

Redline is recommended for fans of imaginative design and intense, heavily stylized racing action, and who don’t mind a tone that’s irreverent and a bit juvenile.