We hope these selections serve to educate and encourage a dialogue on topics of voting in the US, from ongoing fights for equal voting rights and fair elections to the inner workings of our electoral processes. 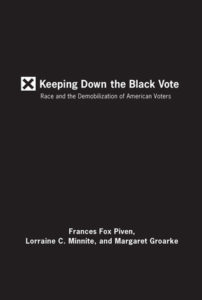 Keeping Down the Black Vote : Race and the Demobilization of American Voters by Frances Fox Piven

“In recent years, the Republican party, the Bush administration, and the conservative movement have made strategies to demobilize likely Democratic voters a key campaign tactic, even overshadowing the Republican efforts to mobilize the Republican party’s base. From misinformation campaigns, new voter ID rules, and inordinately long lines at the polls to sloppy and inaccurate registration records and the abuse of felon disenfranchisement laws, party efforts to suppress voters have become the under-the-radar dynamic determining American elections. Keeping Down the Black Vote reveals that the effort to rig the system is not all that new. Party competition in America has frequently taken the form of blocking voters in the opposition, and race has often been at the heart of the game.” 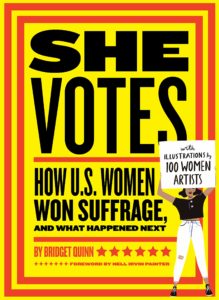 She Votes: How U.S. Women Won Suffrage, and What Happened Next by Bridget Quinn

“From the first female Principal Chief of the Cherokee Nation to the first woman to wear pants on the Senate floor, Quinn shines a spotlight on the women who broke down barriers. She shows how, in the hundred years since the ratification of the Nineteenth Amendment, women have continued to speak out so that all U.S. women truly have a voice in the future of their country. — adapted from jacket” 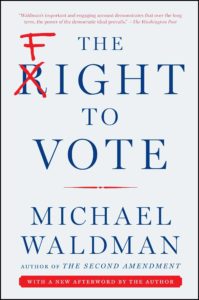 The Fight to Vote by Michael Waldman

“Michael Waldman takes a succinct and comprehensive look at a crucial American struggle: the drive to define and defend government based on “the consent of the governed.” From the beginning, and at every step along the way, as Americans sought to right to vote, others have fought to stop them. This is the first book to trace the full story from the founders’ debates to today’s challenges: a wave of restrictive voting laws, partisan gerrymanders, the flood of campaign money unleashed by Citizens United.” 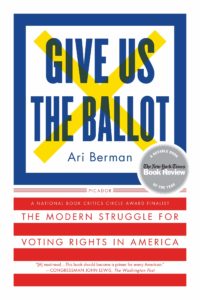 Give Us the Ballot : The Modern Struggle for Voting Rights in America by Ari Berman

“On the fiftieth anniversary of the Voting Rights Act, a riveting and alarming account of the continuing battle over the right to vote. The adoption of the landmark Voting Rights Act in 1965 enfranchised millions of Americans and is widely regarded as the crowning achievement of the civil rights movement. And yet fifty years later we are still fighting heated battles over race, representation, and political power–over the right to vote, the central pillar of our democracy. A groundbreaking narrative history of voting rights since 1965, Give Us the Ballot tells the story of what happened after the act was passed.” 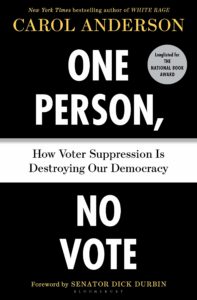 One Person, No Vote : How Voter Suppression Is Destroying Our Democracy by Carol Anderson

“Chronicles the rollbacks to African American participation in the vote since the Supreme Court’s 2013 Shelby ruling, which allowed districts to change voting requirements without approval from the Department of Justice.” 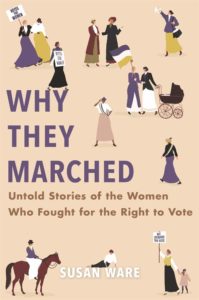 Why They Marched : Untold Stories of the Women Who Fought for the Right to Vote by Susan Ware

“For too long the history of how American women won the right to vote has been told as the visionary adventures of a few iconic leaders, all white and native-born, who spearheaded a national movement. In this essential reconsideration, Susan Ware uncovers a much broader and more diverse history waiting to be told. Why They Marched is the inspiring story of the dedicated women–and occasionally men–who carried the banner in communities across the nation, out of the spotlight, protesting, petitioning, and demonstrating for the right to become full citizens.” 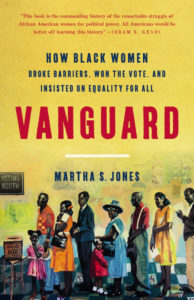 Vanguard : How Black Women Broke Barriers, Won the Vote, and Insisted on Equality for All by Martha S. Jones

“According to conventional wisdom, American women’s campaign for the vote began with the Seneca Falls convention of 1848 and ended with the ratification of the Nineteenth Amendment in 1920. The movement was led by storied figures such as Elizabeth Cady Stanton and Susan B. Anthony. But this women’s movement was an overwhelmingly white one, and it secured the constitutional right to vote for white women, not for all women. In Vanguard, acclaimed historian Martha Jones offers a sweeping history of African American women’s political lives in America, recounting how they fought for, won, and used the right to the ballot and how they fought against both racism and sexism. From 1830s Boston to the passage of the Voting Rights Act in 1965 and beyond to Shirley Chisholm, Stacey Abrams, and Kamala Harris, Jones excavates the lives and work of black women who, although in many cases suffragists, were never single-issue activists.” 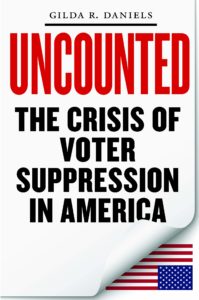 Uncounted : The Crisis of Voter Suppression in America by Gilda R. Daniels

“An answer to the assault on voting rights–crucial reading in advance of the 2020 presidential election. The Voting Rights Act of 1965 is considered one of the most effective pieces of legislation the United States has ever passed. It enfranchised hundreds of thousands of voters, particularly in the American South, and drew attention to the problem of voter suppression. Yet in recent years there has been a continuous assault on access to the ballot box in the form of stricter voter ID requirements, meritless claims of rigged elections, and baseless accusations of voter fraud. In the past these efforts were aimed at eliminating African American voters from the rolls, and today, new laws seek to eliminate voters of color, the poor, and the elderly, groups that historically vote for the Democratic Party. Uncounted examines the phenomenon of disenfranchisement through the lens of history, race, law, and the democratic process. Gilda R. Daniels, who served as Deputy Chief in the United States Department of Justice Civil Rights Division and more than two decades of voting rights experience, argues that voter suppression works in cycles, constantly adapting and finding new ways to hinder access for an exponentially growing minority population.” “The Fourteenth Amendment, ratified on July 9, 1868, identified all legitimate voters as ‘male.’ In so doing, it added gender-specific language to the U.S. Constitution for the first time. Suffrage Reconstructed is the first book to consider how and why the amendment’s authors made this decision. Vividly detailing congressional floor bickering and activist campaigning, Laura E. Free takes readers into the pre- and postwar fights over precisely who should have the right to vote. Free demonstrates that all men, black and white, were the ultimate victors of these fights, as gender became the single most important marker of voting rights during Reconstruction.” 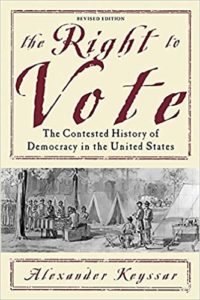 The Right to Vote : The Contested History of Democracy in the United States by Alexander Keyssar

“Originally published in 2000, The Right to Vote was widely hailed as a magisterial account of the evolution of suffrage from the American Revolution to the end of the twentieth century. In this revised and updated edition, Keyssar carries the story forward, from the disputed presidential contest of 2000 through the 2008 campaign and the election of Barack Obama. The Right to Vote is a sweeping reinterpretation of American political history as well as a meditation on the meaning of democracy in contemporary American life.” 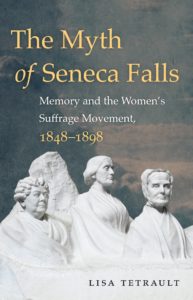 The Myth of Seneca Falls: Memory and the Women’s Suffrage Movement, 1848-1898 by Lisa Tetrault

“The story of how the women’s rights movement began at the Seneca Falls convention of 1848 is a cherished American myth. The standard account credits founders such as Elizabeth Cady Stanton, Susan B. Anthony, and Lucretia Mott with defining and then leading the campaign for women’s suffrage. In her provocative new history, Lisa Tetrault demonstrates that Stanton, Anthony, and their peers gradually created and popularized this origins story during the second half of the nineteenth century in response to internal movement dynamics as well as the racial politics of memory after the Civil War. The founding mythology that coalesced in their speeches and writings–most notably Stanton and Anthony’s History of Woman Suffrage--provided younger activists with the vital resource of a usable past for the ongoing struggle, and it helped consolidate Stanton and Anthony’s leadership against challenges from the grassroots and rival suffragists.” 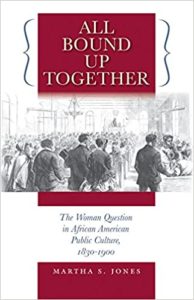 All Bound Up Together: The Woman Question in African American Public Culture, 1830-1900 by Martha S. Jones

“The place of women’s rights in African American public culture has been an enduring question, one that has long engaged activists, commentators, and scholars. All Bound Up Together explores the roles black women played in their communities’ social movements and the consequences of elevating women into positions of visibility and leadership. Martha Jones reveals how, through the nineteenth century, the “woman question” was at the core of movements against slavery and for civil rights.” 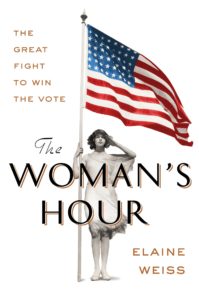 The Woman’s Hour: The Great Fight to Win the Vote by Elaine Weiss

“The nail-biting climax of one of the greatest political battles in American history. Nashville, August 1920. The Nineteenth Amendment to the Constitution, granting all women the vote, is on the verge of ratification–or defeat. Out of the thirty-six states needed, thirty-five have approved it, and one last state is still in play–Tennessee. After a seven-decade crusade to win the ballot, this is the moment of truth for the suffragists, and Nashville becomes a frenzied battleground as the enormous forces allied for and against women’s suffrage make their last stand. Elaine Weiss artfully recasts the saga of women’s quest for the vote by focusing on the campaign’s last six weeks, when it all came down to one ambivalent state. The dauntless–but divided–suffragists confront the ‘Antis’–women who oppose their own enfranchisement, fearing suffrage will bring about the moral collapse of the nation.” 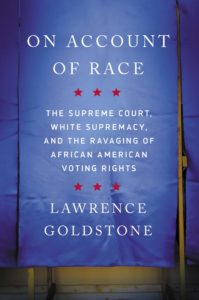 On Account of Race : The Supreme Court, White Supremacy, and the Ravaging of African American Voting Rights by Lawrence Goldstone

“Beginning in 1876, the Court systematically dismantled both the equal protection guarantees of the Fourteenth Amendment, at least for African-Americans, and what seemed to be the guarantee of the right to vote in the Fifteenth. And so, of the more than 500,000 African-Americans who had registered to vote across the South, the vast majority former slaves, by 1906, less than ten percent remained. Many of those were terrified to go the polls, lest they be beaten, murdered, or have their homes burned to the ground. None of this was done in the shadows-those determined to wrest the vote from black Americans could not have been more boastful in either intent or execution. But the Court chose to ignore the obvious and wrote decisions at odds with the Constitution, preferring to instead reinforce the racial stereotypes of the day.” 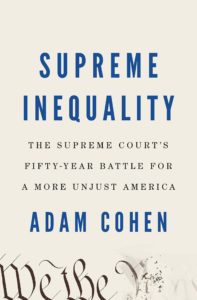 “In Supreme Inequality, bestselling author Adam Cohen surveys the most significant Supreme Court rulings since the Nixon era and exposes how rarely the Court has veered away from its agenda of promoting inequality. Contrary to what Americans like to believe, the Court does little to protect the rights of the poor and disadvantaged; in fact, it has not been on their side for fifty years. Many of the greatest successes of the Warren Court, in areas such as school desegregation, voting rights, and protecting workers, have been abandoned in favor of rulings that protect corporations and privileged Americans, who tend to be white, wealthy, and powerful.”