The Lady From the Black Lagoon 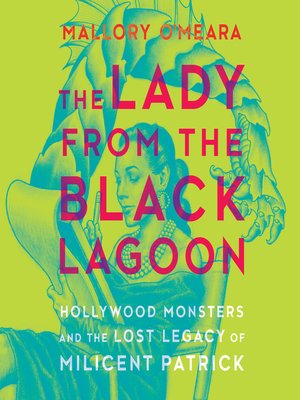 In her debut written work, film producer Mallory O’Meara dives into the lost legend of the woman behind the infamous Creature From the Black Lagoon: Millicent Patrick. The biography begins with Patrick’s early and complicated family life, illustrating her first encounters with chauvinism. With a penchant for art, Patrick moved away from her unstable home life and gravitated towards Hollywood where she is credited to be one of the first female animators at the up-and-coming Disney Studios. On an upward rise, she was hired at Universal Studios to animate multiple monster projects while simultaneously landing multiple background roles on camera due to her stunning appearance. Despite never achieving her big break in acting, the opportunity of a lifetime came up when the film Creature From the Black Lagoon was in the works. Patrick played a key role in the animation team that created the Creature.

With the project complete and the studio set to launch the film, Patrick’s skill and combination of striking good looks led to the perfect marketing campaign: “The Beauty Who Created the Beast.” The problem: Bud Westmore, lead of the makeup team and a powerhouse name at Universal, wanted sole credit and claimed licence over the Creature. As a result of Westmore’s jealousy, Patrick was blacklisted from all current and future projects at Universal Studios, causing a devastating blow to her career as an artist. Patrick’s life was often dictated by a sexist shadow, but it never stopped her from doing what she loved or took away her strong sense of self, talent and individuality.

The Lady From the Black Lagoon revolves around the power of feminism. O’Meara beautifully intermingles the problematic male dominated mindset of today’s film industry (and in society in general) with the repression Patrick experienced. In reading this biography, there is vindication for the almost-lost art of an extraordinary individual and reclaims deserved praise to this female creator. As a first work, the writing style flows with a casual cadence that will connect with mature readers looking for a touch humor and empowerment. There are points in which the same snippets of information are reiterated with similar phrasing at various times, distracting from an established rhythm, but overall, this work tells a rich story about a highly compelling and brilliant woman.