Falling in Love Over Food

Hungry? Get ready to devour these Young Adult books about cooking, baking, family restaurants, and falling in love. 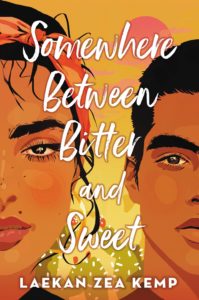 Somewhere Between Bitter and Sweet by Laekan Zea Kemp

As an aspiring pastry chef, Penelope Prado has always dreamed of opening her own pastelería next to her father’s restaurant, Nacho’s Tacos. She meets a cute new hire at Nacho’s who sees through her hard exterior and asks the questions she’s been too afraid to ask herself. Xander Amaro’s job at Nacho’s is a chance at a normal life, to settle in at his abuelo’s, and to find the father who left him behind. But when both the restaurant and Xander’s immigrant status are threatened, he will do whatever it takes to protect his new found family and himself. Together, Pen and Xander must navigate first love and discovering where they belong — both within their families and their fiercely loyal Chicanx community — in order to save the place they all call home. 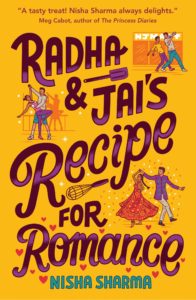 Radha is on the verge of becoming one of the greatest kathak dancers in the world . . . until a family betrayal costs her the biggest competition of her life. At the Princeton Academy of the Arts, Radha is determined to leave performing in her past and reinvent herself from scratch. Jai is captain of the Bollywood Beats dance team, ranked first in his class, and is an overachiever with no college plans. When Radha enters his life, he realizes she’s the exact ingredient he needs for a show-stopping senior year. With careful choreography, both Radha and Jai will need to face their fears (and their families) if they want a taste of a happily ever after. 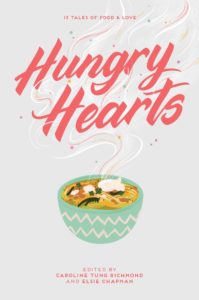 A stunning collection of short stories about the intersection of family, culture, and food in the lives in teens. A shy teenager attempts to express how she really feels through the pastries she makes at her family’s pasteleria. A tourist from Montenegro desperately seeks a magic soup dumpling that can cure his fear of death. An aspiring chef realizes that butter and soul are the key ingredients to win a cooking competition that could win him the money to save his mother’s life. Told in interconnected short stories, Hungry Hearts explores the many meanings food can take on beyond mere nourishment. 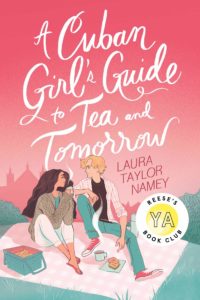 For Lila Reyes, a summer in England was never part of the plan, but then the Trifecta happened and everything fell apart. Worried about Lila’s mental health, her parents send her to spend three months with family friends in Winchester, England, to relax and reset. But with the lack of sun, a grumpy inn cook, and a small town lacking Miami flavor (both in food and otherwise), what would be a dream trip for some feels more like a nightmare to Lila…until she meets Orion Maxwell. A teashop clerk with troubles of his own, Orion is determined to help Lila out of her funk, and appoints himself as her personal tour guide. From Winchester’s drama-filled music scene to the sweeping English countryside, it isn’t long before Lila is not only charmed by Orion, but England itself. Soon a new future is beginning to form in Lila’s mind–one that would mean leaving everything she ever planned behind. 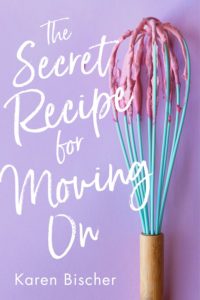 The Secret Recipe for Moving On by Karen Bischer

Ellie Agresti’s not sure anything could be worse than being dumped by her boyfriend, Hunter, the first day of senior year. But sharing a “life skills” class with him and his new girlfriend, Brynn? AND getting partnered with a “family” of misfits? It’s a recipe for certain disaster . . . until an in-class competition allows Ellie to channel her angst into beating Hunter and Brynn’s team, and she unexpectedly bonds with her own group–especially Luke–in the process. But as Ellie soon discovers, it will take more than classroom triumphs to heal her broken heart–and find herself again. 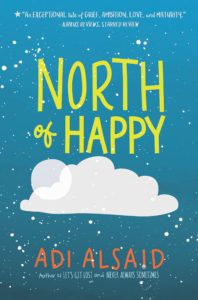 North of Happy by Adi Alsaid

A dual citizen of Mexico and the United States, Carlos Portillo is happy to follow the well-worn path to a future of comfort and ease in Mexico City that’s been planned for him since birth. But when his older brother Felix is tragically killed, Carlos is determined to live out his own dreams for the both of them. He escapes to San Juan Island off the coast of Washington state and gets a job with a celebrity chef he’s admired from afar for years. But while things are coming together for him in the kitchen, a forbidden romance with his boss’s daughter could end his career before it even begins. 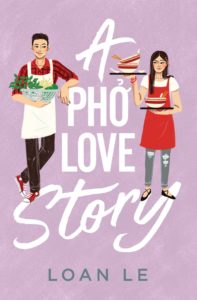 Bao Nguyen works at his parents’ pho restaurant, and even there, he is his parents’ fifth favorite employee. Linh Mai loves art and dreams pursuing a career in it. The only problem? Her parents rely on her to work full-time at her family’s pho restaurant. For years, the Mais and the Nguyens have been at odds, having owned competing, neighboring pho restaurants. But then a chance encounter brings Linh and Bao in the same vicinity despite their best efforts and sparks fly, leading them both to wonder what took so long for them to connect. But then, of course, they immediately remember. Can Linh and Bao find love in the midst of feuding families and complicated histories? 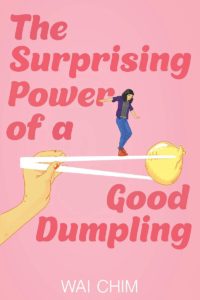 The Surprising Power of a Good Dumpling by Wai Chim

Anna Chiu has her hands full. When she’s not looking after her brother and sister or helping out at her father’s restaurant, she’s taking care of her mother, whose debilitating mental illness keeps her in bed most days. Her father’s new delivery boy, Rory, is a welcome distraction and even though she knows that things aren’t right at home, she’s starting to feel like she could be a normal teen. But when her mother finally gets out of bed, things go from bad to worse. And as her mother’s condition worsens, Anna and her family question everything they understand about themselves and each other. 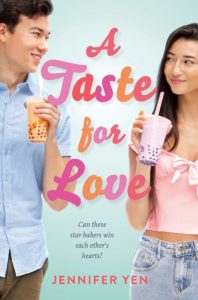 A Taste for Love by Jennifer Yen

To her friends, high school senior Liza Yang is nearly perfect. Smart, kind, and pretty, she dreams big and never shies away from a challenge. But to her mom, Liza is anything but. Compared to her older sister Jeannie, Liza is stubborn, rebellious, and worst of all, determined to push back against all of Mrs. Yang’s traditional values, especially when it comes to dating. The one thing mother and daughter do agree on is their love of baking. Mrs. Yang is the owner of Houston’s popular Yin & Yang Bakery. With college just around the corner, Liza agrees to help out at the bakery’s annual junior competition to prove to her mom that she’s more than her rebellious tendencies once and for all. But when Liza arrives on the first day of the bake-off, she realizes there’s a catch- all of the contestants are young Asian American men her mother has handpicked for Liza to date. The bachelorette situation Liza has found herself in is made even worse when she happens to be grudgingly attracted to one of the contestants; the stoic, impenetrable, annoyingly hot James Wong. As she battles against her feelings for James, and for her mother’s approval, Liza begins to realize there’s no tried and true recipe for love. 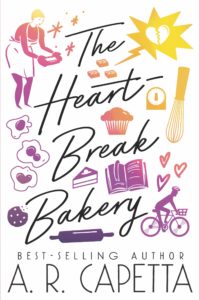 The Heartbreak Bakery by A.R. Capetta

Teenage baker Syd sends ripples of heartbreak through Austin’s queer community when a batch of  brownies turns out to be magical–and makes everyone who eats them break up. Now Syd is baking at the Proud Muffin, a queer bakery and community space in Austin. And everyone who eats Syd’s breakup brownies . . . breaks up. Even Vin and Alec, who own the Proud Muffin. And their breakup might take the bakery down with it. But the cute bike delivery person, Harley, believes Syd about the magic baking. And Harley believes Syd’s magical baking can fix things, too–one recipe at a time. 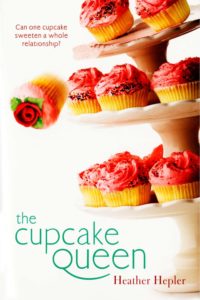 The Cupcake Queen by Heather Hepler

When her mother moves them from the city to a small town to open up a cupcake bakery, Penny’s life isn’t what she expected. Her father has stayed behind, and Mom isn’t talking about what the future holds for their family. And then there’s Marcus, the boy who is always running on the beach. But just when it looks as though Penny is settling in, her parents ask her to make a choice that will turn everything upside down again. A sweet novel about love, creativity, and accepting life’s unexpected turns. 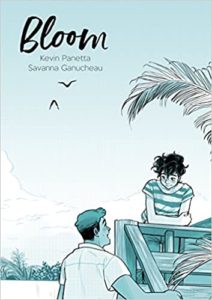 Now that high school is over, Ari is dying to move to the big city with his ultra-hip band, if he can just convince his dad to let him quit their struggling family bakery. Though he loved working there as a kid, Ari cannot fathom a life wasting away his days over rising doughs and hot ovens. But in the midst of interviewing candidates for his replacement, Ari meets Hector, an easy-going guy who loves baking as much as Ari wants to escape it. As they become closer over batches of breads, love begins to bloom . . . that is, if Ari doesn’t ruin everything. 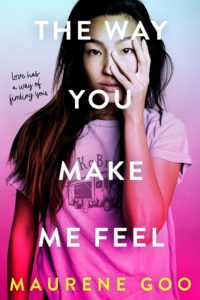 The Way You Make Me Feel by Maurene Goo

Clara Shin lives for pranks and disruption. When she takes one joke too far, her dad sentences her to a summer working on his food truck, the Honeycut, alongside her uptight classmate Rose Carver. Not the carefree summer Clara imagined. But maybe Rose isn’t so bad. Maybe the boy named Hamlet (yes, Hamlet) on the truck next door is pretty cute. Maybe Clara’s estranged mom deserves a second chance. What if taking these relationships seriously means leaving her old self behind?