Be curious about the world around you! Celebrate Kid Inventors’ Day on January 17 with these books about inventors, inventions, and pioneering scientists – all great for reading aloud. 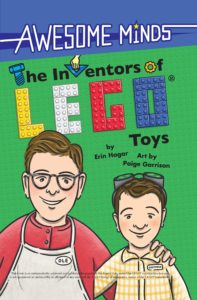 Awesome Minds: the inventors of LEGO toys by Erin Hagar

Everyone has played with LEGO toys, but not many people know who is behind this awesome invention. This fun and engaging book tells the story of how a Danish carpenter and his family turned a desperate situation into the most popular toy in history. 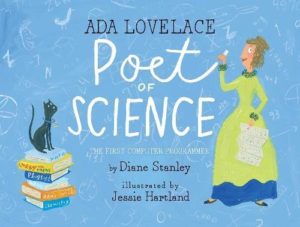 A hundred years before the dawn of the digital age, Ada Lovelace envisioned the computer-driven world we know today. And in demonstrating how the machine would be coded, she wrote the first computer program. 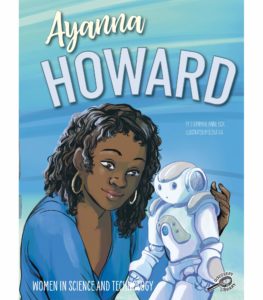 As a young child, Ayanna Howard liked figuring out how things worked. Her creativity and love for math led her to become a robotics engineer who continues to solve problems for Earth and space. 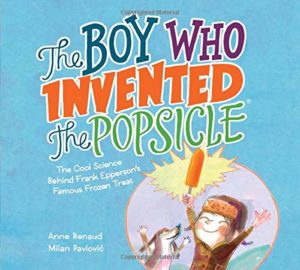 The Boy Who Invented the Popsicle: the cool science behind Frank Epperson’s Famous Frozen Treat by Anne Renaud

In this innovative picture book, Anne Renaud tells a lively story inspired by a real person and true events. Budding scientists will be inspired to emulate the way Frank follows his curiosity, works hard and never gives up — a growth mindset in action. 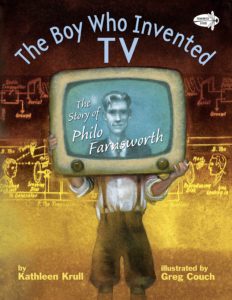 The Boy Who Invented TV: the story of Philo Farnsworth by Kathleen Krull

Plowing a potato field in 1920, a 14-year-old farm boy from Idaho saw in the parallel rows of overturned earth a way to “make pictures fly through the air.” This boy was not a magician; he was a scientific genius and just eight years later he made his brainstorm in the potato field a reality by transmitting the world’s first television image. This fascinating picture-book biography of Philo Farnsworth covers his early interest in machines and electricity, leading up to how he put it all together in one of the greatest inventions of the 20th century. 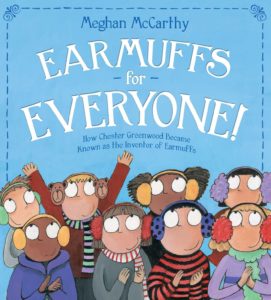 Earmuffs for Everyone!: how Chester Greenwood became known as the inventor of ear muffs by Meghan McCarthy

The Smithsonian has declared Chester Greenwood one of America’s most outstanding inventors! In this fun and fact-filled picture book you can find out all about Chester Greenwood’s ear protectors and his other clever creations. 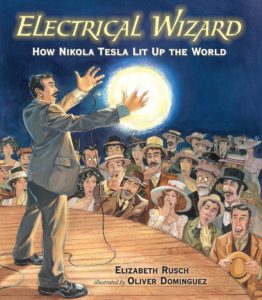 Electrical Wizard: how Nikola Tesla lit up the world by Elizabeth Rusch

When a Serbian boy named Nikola Tesla was three, he stroked his cat and was enchanted by the electrical sparks. By the time he was a teenager, he had made a vow: Someday I will turn the power of Niagara Falls into electricity. Here is the story of the ambitious young man who brought life-changing ideas to America. 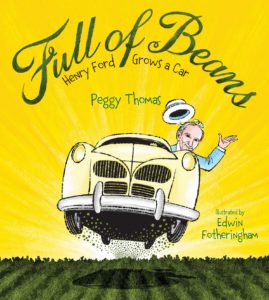 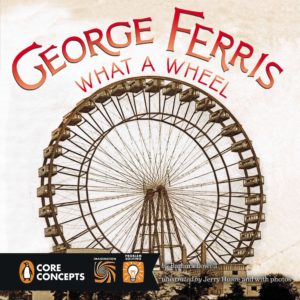 George Ferris, what a wheel! by Barbara Lowell

A portrait of the engineer who invented the Ferris wheel, this picture book biography describes the ambitious ideas that inspired him to build the largest wheel in the world for the Chicago World’s Fair in 1893. 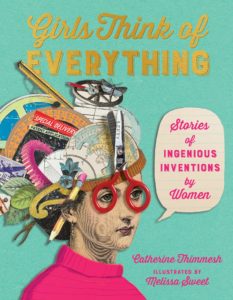 Girls Think of Everything: stories of ingenious inventions by women by Catherine Thimmesh

In kitchens and living rooms, in garages and labs and basements, even in converted chicken coops, women and girls have invented ingenious innovations that have made our lives simpler and better. What inspired these girls, and just how did they turn their ideas into realities? As inspiring as they are fascinating, these stories empower readers to imagine, to question, to experiment, and then to go forth… and invent. 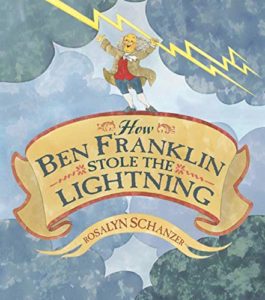 How Ben Franklin Stole the Lightning by Rosaly Schanzer

Ben Franklin was the most famous American in the entire world during colonial times. No wonder! After all, the man could do just about anything. Why, he was an author and an athlete and a patriot and a scientist and an inventor to boot. He even found a way to steal the lightning right out of the sky. 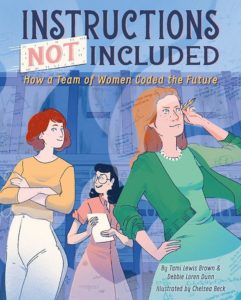 Instructions not included: how a team of women coded the future by Tami Lewis Brown

During World War II, people hoped ENIAC (Electronic Numerical Integrator and Computer), one of the earliest computers, could help with the war effort. With little guidance, no instructions, and barely any access to the machine itself, Betty Snyder, Jean Jennings, and Kay McNulty used mathematics, electrical engineering, logic, and common sense to command a computer as large as a room and create the modern world. 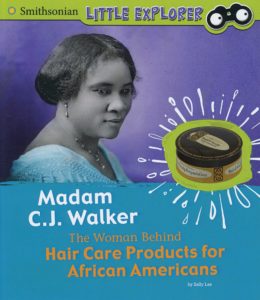 In the early 20th century, Madame C.J. Walker identified a problem, one she herself had: African Americans had no hair care products specifically designed for their hair type. So what did she do? The uneducated daughter of sharecroppers researched, invented, tested, refined, and marketed her way to becoming a self-made millionaire! Historic photos fortify this inspiring rags-to-riches story. 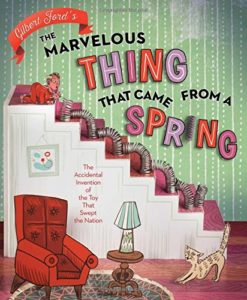 The Marvelous Thing that Came from a Spring: the accidental invention of the toy that swept the nation by Gilbert Ford

This picture book captures the joy, creativity, and determination behind the invention of an iconic, one-of-a-kind toy: the Slinky! 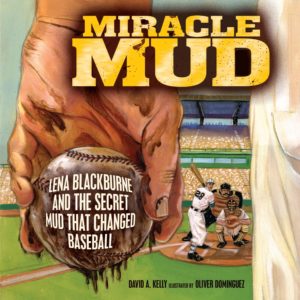 Miracle Mud: Lena Blackburne and the secret mud that changed baseball by David A. Kelly

Lena Blackburne loved baseball. He watched it, he played it, he coached it. But he didn’t love the ways players broke in new baseballs. Tired of soggy, blackened, stinky baseballs, he found a better way. Thanks to a well-timed fishing trip and a top-secret mud recipe, Lena Blackburne Baseball Rubbing Mud was born. Read the story of how Lena’s mud went from a riverbank to the major leagues and all the way to the Hall of Fame. 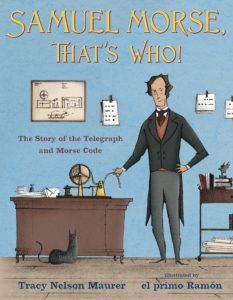 Samuel Morse, that’s who!: the story of the telegraph and Morse Code by Tracy Maurer

Back in the 1800s, information traveled slowly. Who would dream of instant messages? Who imagined a system that would use electric pulses to instantly carry coded messages between two machines, rain or shine? Long before the first telephone, who changed communication forever? Samuel Morse, that’s who! 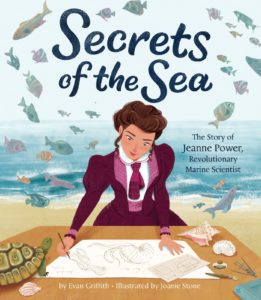 Secrets of the Sea: the story of Jeanne Power, revolutionary marine scientist by Evan Griffith

The curiosity, drive, and perseverance of the nineteenth-century woman scientist who pioneered the use of aquariums to study ocean life are celebrated in this gorgeous, empowering picture book. 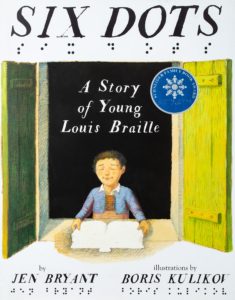 Louis Braille was just five years old when he lost his sight. He was a clever boy, determined to live like everyone else, and what he wanted more than anything was to be able to read. But even at the school for the blind in Paris, there were no books for him. And so he invented his own alphabet-a whole new system for writing that could be read by touch-a system so ingenious that it is still used by the blind community today. 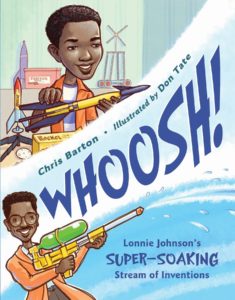 Lonnie Johnson’s life began alongside a whole mess of brothers and sisters and grew to include a love for rockets, robots, inventions, and creativity. With persistence and a passion for problem solving, he became an engineer and worked for NASA. But it is his invention of the Super Soaker water gun that has made his most memorable splash with kids and adults. 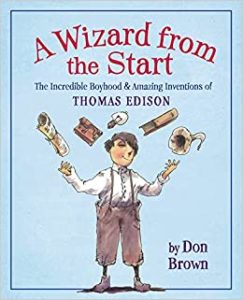 A Wizard From the Start: the incredible boyhood & amazing inventions of Thomas Edison by Don Brown

From his humble boyhood as a farmer’s son, selling newspapers on trains, reading through public libraries shelf by shelf, and dreaming of new inventions, Thomas Edison went on to create the light bulb, the phonograph, and the motion picture camera.