Legion: The Many Lives of Stephen Leeds 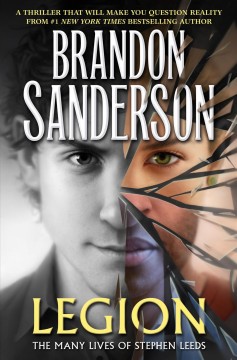 Stephen Leeds is not insane.

How do you know that? Well, he tells you that repeatedly.

It’s his hallucinations that are crazy.

Stephen Leeds is a genius, but his genius manifests in a very unusual way. He can rapidly absorb vast amounts of knowledge, but in order to access it he creates hallucinatory people called Aspects that hang around him and give him the information when he needs it.

However, the Aspects each have personalities and quirks of their own and don’t always do exactly what Stephen wants them to do.

Legion: The Many Lives of Stephen Leeds is a collection of 3 Stephen Leeds novellas. There are certain threads that carry over between the stories, but each also functions as a self-contained episode, with a series finale in the final episode.

The stories are sharp and well-paced, with lots of fun interactions between Stephen, his Aspects, and the occasional real person who sees Stephen talking and listening to people that aren’t there. Things take a bit more of an emotional turn in the final chapter with an ending that’s a bit of a left turn, but things are still wrapped up pretty well.

The audiobook in particular is very well done, with narrator Oliver Wyman doing a great job of slipping into the distinct voices of the various characters in a very smooth way. The pacing of the writing is also very conducive to audio, with lots of short sections and good chapter breaks and cliffhangers.

Legion: The Many Lives of Stephen Leeds is a good, fun action-adventure that turns a bit heavier toward the end of the third story. It is recommended to Brandon Sanderson fans generally and fans of good, if a bit quirky, action-adventure stories with lots of fun character interplay and interaction.