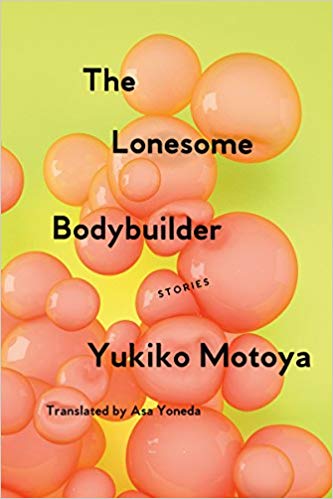 A woman takes up bodybuilding on a whim, starts getting huge but her husband doesn’t notice. A sales clerk at a clothing store waits on someone who cannot find anything she likes herself in and may not be human. A shopkeeper whose stall keeps getting wrecked by a bizarre stampede of men in suits and women in white dresses doing martial arts hides covers himself in glue in order to see where the stampede goes.

And eight other stories that are various levels of magical, surreal, and bizarre.

The Lonesome Bodybuilder is a collection of short stories from Japanese author Yukiko Motoya that was originally published in 2015, then translated to English in 2018. The first couple stories would fit into the magical realism style, with some surrealism and even a touch of body horror.

Some of the later stories veer into more bizarre territory.

Most of the stories are from a female point of view and many of them explore aspects of relationship and gender dynamics in Japanese culture. The writing and translation are quite good, featuring many vivid descriptions of the bizarre things that happen in the stories, and importantly the humor survives the translation in fine form. The pacing varies a bit from piece to piece, with some being very short and to the point while some others meander and wander a bit, mixing things up nicely.

The Lonesome Bodybuilder is recommended for people that like short stories, like absurdism and magical realism, and find the idea of a glimpse into Japanese culture compelling.