As the weather changes from greens to golds, snuggle up with these cozy mysteries from our collection. 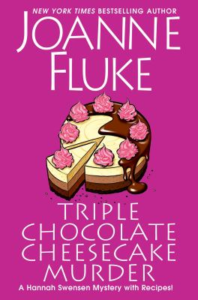 Hannah Swensen, owner of the Cookie Jar in Lake Eden, Minnesota, and her crew (Andrea, Michelle, Lonnie, Mike, and Norman) swing into action when Hannah’s sister, Andrea, finds bullying Mayor Richard Bascomb’s body in his office the evening after she had a physical altercation with him over her husband’s job. While Andrea is a suspect, there are numerous others in the mix, from Bascomb’s long-suffering wife, who put up with his many infidelities, to his mistresses, to their significant others. Hannah interviews numerous people, going back to Bascomb’s college days, some of whom seek her out because of her penchant for solving crimes in the community. Hannah, still living with Norman due to her reluctance (and her cat’s refusal) to return to her condo after the devastating events that occurred there in Chocolate Cream Pie Murder  (2019), even manages to begin to teach Andrea how to bake. Fans of the beloved long-running series will revel in another encounter with the familiar cast of characters, all the while relishing the baking frame and the delicious-sounding recipes that are interspersed throughout. 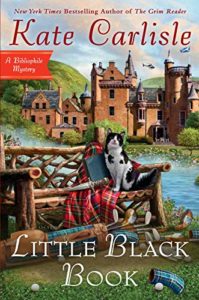 San Francisco book restorer Brooklyn Wainwright has recently married Derek Stone, a sexy, dangerous, and well-connected former MI6 agent. Shortly after he receives a puzzling package mailed from Scotland containing a signed first edition of Rebecca, they’re visited by a nervous woman named Claire Quinn asking Derek if he’d received a package from Scotland. Claire’s aunt is missing, and her only clue is the postal receipt for the package, which she had found a few days earlier, hidden in her aunt’s ransacked apartment, when she arrived for a visit. Claire, an expert on antique weapons, had worked with Brooklyn on the television show This Old Attic. Now they strike up a friendship that will be severely tested. Claire’s aunt Gwyneth Quinn had raised her after her dodgy father vanished, and Derek knows that Gwyneth was an MI6 operative. When Brooklyn and Derek’s cupcake-baking, kick-ass neighbor notices a strange man in the garage, they check and find the man with a dagger in his throat; Claire recognizes him as a phony pizza delivery man she’d refused entry. After Claire’s apartment is trashed, they travel to the home of Derek’s parents in Sonoma, where a second man is killed with a dagger and Brooklyn discovers an encrypted message in Rebecca. A trip to Scotland lands them at a castle near Gwyneth’s home, where they encounter more questions than answers in their hunt for a dangerous killer.A character-driven mystery with plenty of thrilling escapades to keep the plot moving. 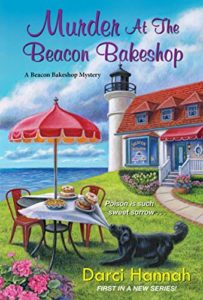 Murder at the Beacon Bakeshop by Darci Hannah

A woman’s dream turns into a cozy nightmare. Retaining the Michigan locale of her Whitney Bloom series, Hannah introduces a determined new sleuth in Lindsey Bakewell, who gave up a lucrative Wall Street career to open a bakeshop/café in Beacon Harbor after catching her fiancé, Jeffery Plank, doing the dirty with pastry chef Mia Long. She and her loyal Newfoundland, Wellington, arrive to discover her dream purchase of a historic lighthouse looking pretty rough. But the inside turns out to be perfect, and the exterior needs only a little paint. The driver who drops off Lindsey suggests his cousin as an experienced baker, and her hunky next-door neighbor, ex-Navy Seal Rory Campbell, turns out to be an extra benefit, even pitching in as a barista on her opening day. That rollout, promoted by realtor Betty Vanhoosen and Lindsey’s best friend, influencer Kennedy Kapoor, draws a big crowd. Unfortunately, the attendees include Fiona Dickel, who wanted the lighthouse preserved as a historical landmark, and Mia and Jeffery, who are out for revenge because they think Lindsey ruined their reputations. A wild scene of flying pastries ensues. Things get worse when Mia dies on the lighthouse lawn, presumably poisoned, and Lindsey finds herself the prime suspect. Uncovering the killer strains Lindsey’s burgeoning romance and puts her in danger. Red herrings, romance, and yummy recipes combine in this charming new series. Cat Me If You Can by Miranda James

James’s enjoyable 13th mystery starring rare books librarian Charlie Harris (after Careless Whiskers) takes Charlie from Athena, Miss., to Asheville, N.C., along with Charlie’s fiancée, bistro owner Helen Louise Brady, and his Maine Coon cat, Diesel, for a weeklong retreat attended by members of the Athena Public Library mystery group. Charlie and Helen Louise are hoping for a relaxing time, despite Helen Louise’s anxiety about giving a presentation on British author Elizabeth Cadell, and Charlie’s Jessica Fletcher–like habit of getting enmeshed in real-life homicide investigations. Sure enough, lightning strikes again, and Charlie winds up evaluating the motives of his fellow mystery readers after one attendee is stabbed to death with a hatpin at the hotel hosting the event. That murder leads to a reevaluation of a previous death at the hotel that was attributed to natural causes. James makes Diesel, whose amiable presence prompts some witnesses to talk more openly, a plausible assistant. This puzzle will be like catnip for feline-loving whodunit fans Murder in a Teacup by Vicki Delany

At the start of Delany’s beguiling sequel to 2020’s Tea & Treachery, the summer tourist trade is heating up for Lily Roberts, the owner of the Tea by the Sea tearoom in  the Cape Cod town of North Augusta, and she’s looking forward to her busiest season yet. Trouble brews when the quarrelsome McHenry clan descend on the tearoom for afternoon tea. Sandra McHenry, a  dear friend of Lilly’s grandmother, Rose Campbell, who runs a  B&B in  North Augusta, is visiting with her recently widowed and wealthy granddaughter, Heather, and several other fractious family members. When Heather’s brother-in -law, Ed French, dies of poisoning shortly after he drinks some tea, law officials shut down Lily’s tearoom and take all the baked good into custody, though they later determine that someone spiked Ed’s tea. To save the tearoom, Lily and Rose must do some sleuthing to figure out who wanted to kill Ed and why. Delany expertly blends a  cunning mystery plot with diverting characters and sparkling dialogue. Laura Childs fans will have fun. 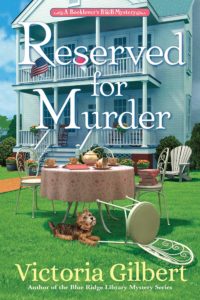 Reserved for Murder by Victoria Gilbert

At her literary-themed B&B in Beaufort, North Carolina, Charlotte Reed is hosting best-selling author Amanda Nobel, Amanda’s tour manager, and three of her superfans, winners of a contest. There are tensions among the group at the outset, and then one of the fans, Lisette Bradford, is found murdered. The main suspect is her stalker ex-husband, but soon additional motives implicate others, from Amanda’s fans and tour manager to a local author to Amanda herself. Meanwhile, Charlotte’s sleuthing partner and neighbor, Ellen Montgomery, a former spy, is hosting the mysterious Gavin Howard, who says he is Ellen’s cousin. Charlotte is suspicious of the connection, so she investigates this mystery as well, finding an actual connection to her deceased great-aunt, who was also a spy back in the day. Charlotte unravels both puzzles, identifies the killer, and learns the real reason behind Gavin’s presence, all while beginning to believe she may be ready for a relationship after several years of widowhood. Plenty of background on books and publishing combine with the agreeable small-town ambience and the sultry southern setting to frame this satisfying cozy. Dogged by Death by Laura Scott

Veterinarian Ally Winter, the heroine of this winning series launch from Scott (the Swat Top Cops series), returns to her hometown of Willow Bluff, Wis., where she purchases a retiring vet’s practice, only to find the good doctor apparently lied about the number of his furry clients. Broke and idle, Ally takes on dog walking. Problems multiply when Ally finds the body of her newest client, crooked attorney Marty Shawlin, on the first day walking Shawlin’s boxer. The first officer to respond to the murder scene is none other than Det. Noah Jorgensen, a former high school quarterback who remembers Ally all too well from several epic moments of high school klutziness. As Jorgensen uncovers a multitude of disgruntled clients with reasons to want Shawlin dead, another body turns up. When true crime aficionado Oscar Winter, Ally’s irascible Gramps, decides to investigate, Ally reluctantly joins in just to keep Gramps safe. Scott delivers distinctive characters, an appealing small-town setting, and a hint of romance. This cozy is perfect for animal lovers. This affecting series launch from Adams (Breach of Crust and  four other Charmed Pie Shoppe mysteries) provides all the best elements of a traditional mystery. Nora Pennington, a former librarian who’s scarred inside and out by a tragic incident in her past, has come to the resort town of Miracle Springs, N.C., to begin anew as the owner of Miracle Books , located in a converted railway station. Nora has an uncanny ability to help her patrons solve their problems by recommending the perfect books  for them to read. A chance encounter on a park bench prompts Nora to invite troubled Neil Parrish to the store, but Neil turns up dead on the railroad tracks before he can take her up on the offer. The death is ruled a suicide, but Nora suspects murder, so she and  three other women form the Secret , Book , and Scone Society  to try and  discover the truth about Neil’s death—and  perhaps to form a bond of trust strong enough to let them share their own painful secrets . Well-drawn characters complement a plot with an intriguing twist or two. 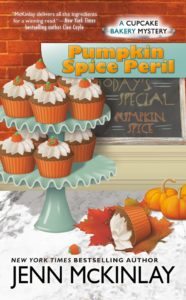 In the twelfth Cupcake Bakery Mystery from New York Times bestselling author Jenn McKinlay, the Fairy Tale Cupcake crew follows the clever crumb trail of a killer who’s anything but cookie-cutter. Life is all sugar and spice for the Fairy Tale Cupcake bakers–Melanie Cooper is engaged to the delectable Joe DeLaura, Angie Harper and her husband Tate are savoring married life, and the bakery is bustling with happy customers. Until one of their most valued cupcake connoisseurs ends up dead. Local glass artist and cupcake lover Rene Fischer-Klein has always suffered from a wide variety of health issues. In an effort to cheer her up, her doting husband, Peter, brings her a four-pack of her favorite cupcakes every week. But when the police discover that Rene has been poisoned, there’s no sugarcoating the fact that the last things she ate were the bakery’s signature pumpkin spice cupcakes! With their lives and bakery at stake, it’s up to Mel and Angie to find out who poisoned their artist friend and why, before their future is frosted for good. Murder returns for a seventh time to the Sugar Maple Inn. And this time it’s not only humans who are in danger.Holly Miller and her grandmother Liesel Miller have done their best to make Wagtail, Virginia, the preeminent vacation destination for pet owners. The visit of four leaders of the Wagtail Animal Guardians branch in Raleigh, who’ve all brought their cats and dogs for Holly’s oddly named No Place Like Home Gala, is a perfect showcase for the inn’s pet-friendly policies. Yet the most important animal is one who’s missing: Judge Grant Barlow’s dog, Fritz, who’s been taken, Holly’s friend Rose Richardson is convinced, as part of a campaign of harassment and intimidation that’s been going on since the judge’s wife, Theona, died six months ago and Wallace McDade, the drunk driver who ran down their daughter, Bobbie, was released from prison. Soon after the irascible judge’s housekeeper, Dovie Dickerson, hires pet detective Seth Bertenshaw to find the missing pooch, Fritz does indeed turn up—standing over the body of Seth, who Sgt. Dave Quinlan reveals has been poisoned with aconite. Could Seth have been involved in the death of Bobbie Barlow? And could Brenda McDade, one of the visiting WAG delegation, have any connection to Wallace McDade?