“On a remote jungle island, genetic engineers have created a dinosaur game park… But as always there is a dark side to the fantasy and after a catastrophe destroys the park’s defense systems, the scientists and tourists are left fighting for survival…” – Cover. 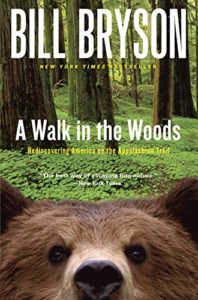 A Walk in the Woods : Rediscovering America on the Appalachian Trail by Bill Bryson

“Distance changes utterly when you take the world on foot. A mile becomes a long way, two miles literally considerable, ten miles whopping, fifty miles at the very limits of conception. The world, you realize, is enormous in a way that only you and a small community of fellow hikers know.”

“Stretching from Georgia to Maine, the Appalachian Trail offers some of America’s most breathtaking scenery. It also offers an irresistible, amusingly ill-conceived adventure to Bryson & his out-of-shape walking companion, Stephen Katz. Mile by arduous mile, these unlikely pioneers walk the Appalachian Trail, along the way surviving the threat of bear attacks, cravings for hot showers & cream sodas, the loss of key provisions, & everything else this rugged territory can throw at them. But Bryson’s account also vividly conjures a backdrop of silent forests & sparkling lakes – America’s astonishing but fragile landscape. Both a hilarious comedy & a tribute to one of our country’s last great wildernesses, A Walk in the Woods is a modern classic of travel literature.” – Publisher’s Description 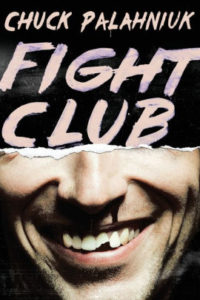 “Chuck Palahniuk showed himself to be his generation’s most visionary satirist in this, his first book. Fight Club’s estranged narrator leaves his lackluster job when he comes under the thrall of Tyler Durden, an enigmatic young man who holds secret after-hours boxing matches in the basements of bars. There, two men fight “as long as they have to.” This is a gloriously original work that exposes the darkness at the core of our modern world.” – Publisher’s Description 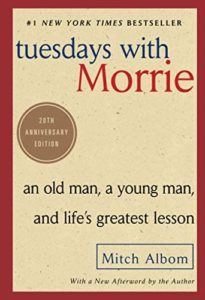 Tuesdays with Morrie : an Old Man, a Young Man, and Life’s Greatest Lesson by Mitch Albom

“Death ends a life, not a relationship.”

“Maybe it was a grandparent, or a teacher, or a colleague. Someone older, patient and wise, who understood you when you were young and searching, helped you see the world as a more profound place, gave you sound advice to help you make your way through it. For Mitch Albom, that person was Morrie Schwartz, his college professor from nearly twenty years ago. Maybe, like Mitch, you lost track of this mentor as you made your way, and the insights faded, and the world seemed colder. Wouldn’t you like to see that person again, ask the bigger questions that still haunt you, receive wisdom for your busy life today the way you once did when you were younger? Mitch Albom had that second chance. He rediscovered Morrie in the last months of the older man’s life. Knowing he was dying, Morrie visited with Mitch in his study every Tuesday, just as they used to back in college. Their rekindled relationship turned into one final “class”: lessons in how to live. Tuesdays with Morrie is a magical chronicle of their time together, through which Mitch shares Morrie’s lasting gift with the world.” – Publisher’s Description 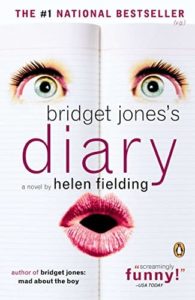 “It is a truth universally acknowledged that when one part of your life starts going okay, another falls spectacularly to pieces.”

“Bridget Jones’s Diary is the devastatingly self-aware, laugh-out-loud account of a year in the life of a thirty-something Singleton on a permanent doomed quest for self-improvement. Caught between the joys of Singleton fun, and the fear of dying alone and being found three weeks later half eaten by an Alsatian; tortured by Smug Married friends asking, “How’s your love life?” with lascivious, yet patronizing leers, Bridget resolves to: reduce the circumference of each thigh by 1.5 inches, visit the gym three times a week not just to buy a sandwich, form a functional relationship with a responsible adult and learn to program the VCR. With a blend of flighty charm, existential gloom, and endearing self-deprecation, Bridget Jones’s Diary has touched a raw nerve with millions of readers the world round. Read it and laugh—before you cry, “Bridget Jones is me!” – Publisher’s Description 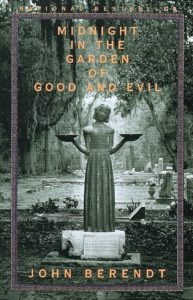 Midnight in the Garden of Good and Evil : a Savannah Story by John Berendt

“Rule number one: Always stick around for one more drink. That’s when things happen. That’s when you find out everything you want to know.”

“Shots rang out in Savannah’s grandest mansion in the misty, early morning hours of May 2, 1981. Was it murder or self-defense? For nearly a decade, the shooting and its aftermath reverberated throughout this hauntingly beautiful city of moss-hung oaks and shaded squares. John Berendt’s sharply observed, suspenseful, and witty narrative reads like a thoroughly engrossing novel, and yet it is a work of nonfiction. Berendt skillfully interweaves a hugely entertaining first-person account of life in this isolated remnant of the Old South with the unpredictable twists and turns of a landmark murder case.

It is a spellbinding story peopled by a gallery of remarkable characters: the well-bred society ladies of the Married Woman’s Card Club; the turbulent young redneck gigolo; the hapless recluse who owns a bottle of poison so powerful it could kill every man, woman, and child in Savannah; the aging and profane Southern belle who is the “soul of pampered self-absorption”; the uproariously funny black drag queen; the acerbic and arrogant antiques dealer; the sweet-talking, piano-playing con artist; young blacks dancing the minuet at the black debutante ball; and Minerva, the voodoo priestess who works her magic in the graveyard at midnight. These and other Savannahians act as a Greek chorus, with Berendt revealing the alliances, hostilities, and intrigues that thrive in a town where everyone knows everyone else.” – Publisher’s Description 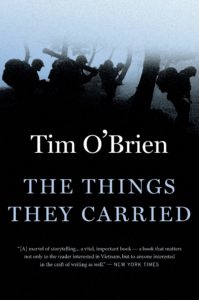 The Things They Carried : a Work of Fiction by Tim O’Brien

“They carried all they could bear, and then some, including a silent awe for the terrible power of the things they carried.”

“This work depicts the heroic young men of Alpha Company as they carry the emotional weight of their lives to war in Vietnam in a patchwork account of a modern journey into the heart of darkness. They battle the enemy (or maybe more the idea of the enemy), and occasionally each other. In their relationships we see their isolation and loneliness, their rage and fear. They miss their families, their girlfriends and buddies; they miss the lives they left back home. Yet they find sympathy and kindness for strangers (the old man who leads them unscathed through the mine field, the girl who grieves while she dances), and love for each other, because in Vietnam they are the only family they have.” – Publisher’s Description 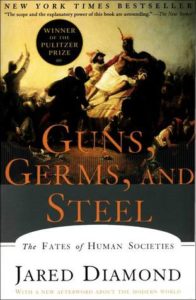 Guns, Germs, and Steel : the Fates of Human Societies by Jared M. Diamond

“Much of human history has consisted of unequal conflicts between the haves and the have-nots.”

“In this “artful, informative, and delightful” (William H. McNeill, New York Review of Books) book, Jared Diamond convincingly argues that geographical and environmental factors shaped the modern world. Societies that had had a head start in food production advanced beyond the hunter-gatherer stage, and then developed religion –as well as nasty germs and potent weapons of war –and adventured on sea and land to conquer and decimate preliterate cultures. A major advance in our understanding of human societies, Guns, Germs, and Steel chronicles the way that the modern world came to be and stunningly dismantles racially based theories of human history. Winner of the Pulitzer Prize, the Phi Beta Kappa Award in Science, the Rhone-Poulenc Prize, and the Commonwealth club of California’s Gold Medal.” – Publisher’s Description 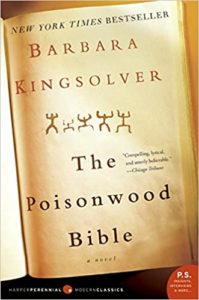 The Poisonwood Bible : a novel by Barbara Kingsolver

“Everything you’re sure is right can be wrong in another place.”

“The Poisonwood Bible is a story told by the wife and four daughters of Nathan Price, a fierce, evangelical Baptist who takes his family and mission to the Belgian Congo in 1959. They carry with them everything they believe they will need from home, but soon find that all of it—from garden seeds to Scripture—is calamitously transformed on African soil. What follows is a suspenseful epic of one family’s tragic undoing and remarkable reconstruction over the course of three decades in postcolonial Africa. The novel is set against one of the most dramatic political chronicles of the twentieth century: the Congo’s fight for independence from Belgium, the murder of its first elected prime minister, the CIA coup to install his replacement, and the insidious progress of a world economic order that robs the fledgling African nation of its autonomy. Taking its place alongside the classic works of postcolonial literature, this ambitious novel establishes Kingsolver as one of the most thoughtful and daring of modern writers.” – Publisher’s Description 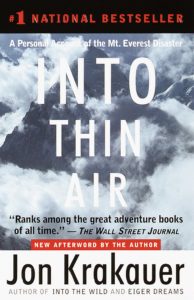 Into Thin Air : a Personal Account of the Mount Everest Disaster by Jon Krakauer

“This forms the nub of a dilemma that every Everest climber eventually comes up against: in order to succeed you must be exceedingly driven, but if you’re too driven you’re likely to die.”

“Reeling from the brain-altering effects of oxygen depletion, Jon Krakauer reached the summit of Mt. Everest in the early afternoon of May 10, 1996. He hadn’t slept in fifty-seven hours. As he turned to begin the perilous descent from 29,028 feet (roughly the cruising altitude of an Airbus jetliner), twenty other climbers were still pushing doggedly to the top, unaware that the sky had begun to roil with clouds…” “This is the terrifying story of what really happened that fateful day at the top of the world, during what would be the deadliest season in the history of Everest. In this harrowing yet breathtaking narrative, Krakauer takes the reader along with his ill-fated expedition, step by precarious step, from Katmandu to the mountain’s pinnacle where, plagued by a combination of hubris, greed, poor judgment, and plain bad luck, they would fall prey to the mountain’s unpredictable fury.” – Jacket