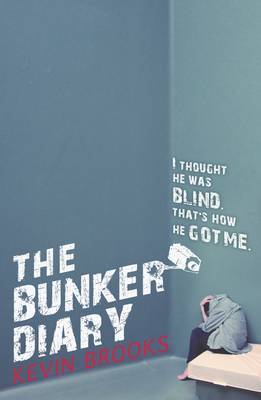 Linus was helping a blind man. He was helping him put boxes in his car. He was doing a kindness, and now Linus is trapped underground with the taste of chloroform on his lips. Now, Linus waits as 5 more people are lowered down on a buttonless elevator. No one knows why this madman has kidnapped them, what he plans to do with them, and they aren’t quite sure where they are–somewhere near Essex, maybe. The only thing they can do is wait for food to come down in the elevator, and try not to stare at the clock.

The Bunker Diary is told from the perspective of Linus, a 16 year-old boy and the first of the bunch to be kidnapped. It’s not just told from his perspective, it’s written as his diary. Linus jots down his thoughts day in and day out to try to keep his sanity, and we watch as he grows more insane. This storytelling choice makes the tale a much more personal one. The reader will feel like they are trapped in this bunker with Linus, like they are in his head. This story was the winner of the Carnegie Medal in 2014, and continues to impress and disturb readers today. Though it is not for the faint of heart, it is for readers who enjoy twisted characters, heaping spoonfuls of symbolism, and self reflection.