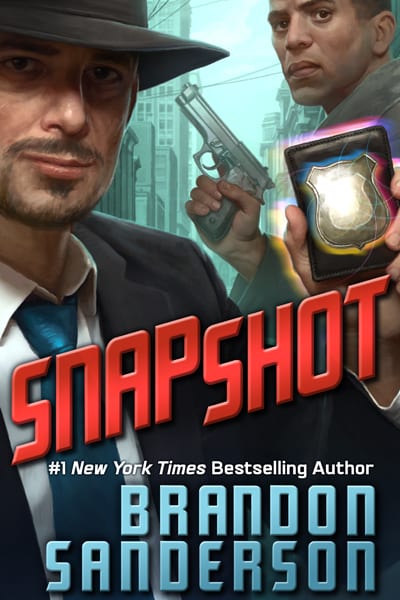 In the near future, the police of New Clipperton have new tool for fighting crime: they can recreate a facsimile of the entire city for a given 24 hour block of time. Armed with knowledge about what is going to happen, real detectives can enter the simulacrum in order to find clues to solve the crimes deemed important enough to use the Snapshot Technology.

However, as with any story about constructed reality, things in the simulation aren’t exactly what they appear to be.

Brandon Sanderson is best known for his incredibly long epic fantasy books, but he also occasionally writes novellas. Snapshot is a brisk, self-contained 98 page story that feels like Philip K Dick crossed with a police procedural, posing questions about the nature of what is real and what is not.

One of the most interesting elements of the story is how the people in the simulation react to finding out they aren’t real; the results vary from person to person and are always dramatic.

The story keeps things moving and there are some great descriptions and character stuff, though the ending was a bit abrupt and at least part of the twist was easy to predict. Still, it’s hard to go wrong with a 98 page, well-written story with a really interesting high concept premise. Unsurprisingly, Snapshot has already been optioned to be made into a movie.

Snapshot is recommended to fans of Philip K Dick and sci-fi police procedurals, along with anyone who wants to get into Brandon Sanderson but doesn’t want to commit to a 500+ page book.