Out of the Silence: After the Crash by Eduardo Strauch 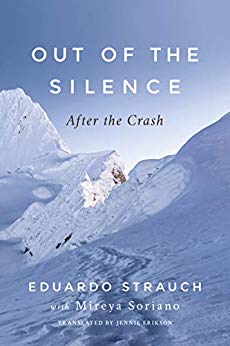 It was the stillness of the mountain that invaded Eduardo Strauch’s mind, body and soul, making him unable to talk about his survival of the 1972 crash of Uruguayan Air Force Flight 571 – until recently.

Strauch received a phone call from an intrepid explorer who found Strauch’s jacket and wallet in the Andes at 14,200 feet when it fell from the plane. On the discovery of the objects, Strauch “felt as if the cordillera were calling to me – reminding me that a piece of myself lay buried beneath the snow….The discovery seemed to represent my own journey over the course of time…” [p.9] It was time for him to tell his story and break his silence.

With the release of his memoir, Desde el Silencio, Out of the Silence, he shares his intimate story of how he was able to reconnect with loved ones after his 72 days in the Valley of Tears, the plane crash site in the vast cordillera in the Andes Mountains. Strauch deftly sets the tone for each chapter with just one word that captures the essence of this remarkable journey.

His constant soul searching and evaluation of his life pre-crash (and if a rescue would happen), will resonate with many of us as we come to terms with our life’s challenges that ultimately shape us.

Other works that give extensive detail of this horrific survival event in the stark landscape include the book Alive [the story of the Andes survivors] and movie I am Alive: surviving the Andes plane crash.