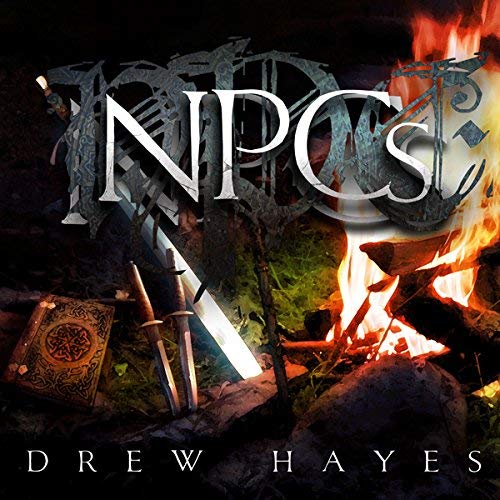 While playing video games or role playing games, how much thought have you put toward the NPCs, non-player characters? Drew Hayes addresses this group of individuals in this series called Spells, Swords, and Stealth. In this first book we meet a group of role players: Mitch, Terry, Glen, Tim, and their game master Russel. Mitch, Terry, and Glen are only in it for the loot, wanting to cause as much violence as possible. Because of this, the group ends up dying during their first session visiting a tavern in the small town of Maplebark. The four NPCs in the tavern when the four players die become the main characters of our story: Thistle the gnome, Gabriella the mayor’s daughter, Eric her guard, and Grumpf the half-orc owner of the tavern. The four must assume the roles of the four players to save their town of Maplebark from certain destruction, travelling to the capital of Soliem to receive a quest from the mad king. Together they travel and bumble their way to becoming adventurers and figuring out the secrets of the real adventurers, the people from another world.

Drew Hayes is able to make the reader think about things that usually go unnoticed. NPCs in games are often ignored, killed, or worse and no one thinks anything of it. Hayes is able to change that perspective and make the reader think about these often-neglected characters. His characterization of the NPCs turned adventurers is great, Thistle, Gabriella, Eric, and Grumpf bring a lot of humor into the story. The way they fumble with their new roles in life and interact with one another is fantastic. All of the characters kind of fall into their true roles within the party and it is a humorous addition to the book that breaks a lot of fantasy character stereotypes. It creates a world that is a lot more real, with diverse people and characters who make mistakes and are not perfect. Additionally the world building throughout the novel is fantastic. We follow our four adventurers through many different small towns and large forests and watch as they meet many different creatures: friend and foe. All in all, this is a light, fun, easy read with lots of humor and magic.