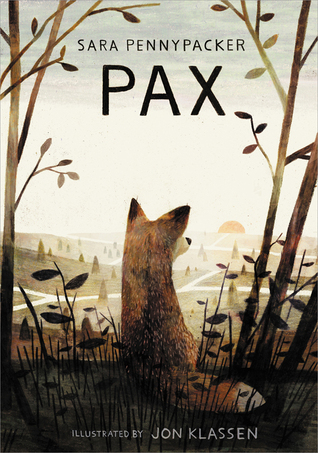 Pax, a pet fox, has been inseparable from his boy, Peter, ever since he found him at only a few weeks old. When Peter’s father enlists in the war and Peter is forced to go live with his grandfather, Pax must be taken back to the wild. When guilt overwhelms Peter for leaving his fox all alone, he sneaks away from his grandfather’s house to make the three hundred mile journey back to Pax.

Pax is heartbreaking and realistic from the start. The story, told in two first person narratives, brings pure emotion from both sides, offering a good mix between the fox and the boy and never favoring one story over the other. Pax’s point of view was kept captivating and authentic as his inner monologue is mostly based on instinct and senses. War as a theme is addressed throughout the book, setting and scene are thoroughly described, and small illustrations throughout the book give it more dimension. Supporting characters are well rounded and help bring different points of view to different aspects of the story, all while helping the main characters grow along the way. Overall, the book is a touching story about the unbreakable bond between boy and pet.