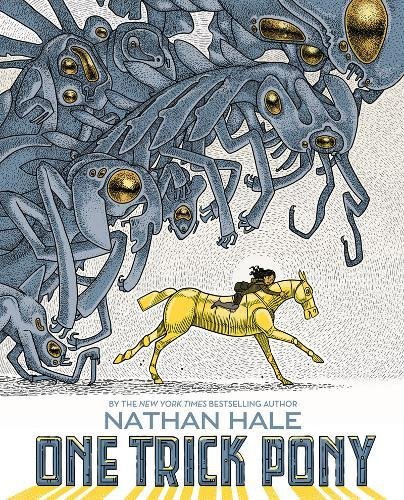 It’s Earth, and it’s the future: aliens are hunting humans to harvest electricity, and destroying civilization in the process. At the accidental center of the conflict is Strata, a girl who finds and befriends a robot pony hidden among the wreckage of an old spaceship. Together she and her new robot friend, Kleidi, must choose whether to run from or face their alien enemies.

Although author Nathan Hale is better known for his best-selling historical graphic novel series, Hazardous Tales, he makes an exciting dip into science fiction with One Trick Pony. In many ways, this graphic novel is a middle-grade introduction to dystopian fiction. Hale’s dreary grey-brown color palette emphasizes the bleakness of this futuristic world, where Strata’s family must constantly move to protect humanity’s dwindling technological and artistic resources. The exceptions to this monochromatic rule are Kleidi and the other robots, whose bright gold coloring emphasize their importance to the narrative. Small text accompanies detailed illustrations and implies an older target audience, which may disagree with some readers drawn in by the youthful girl-and-her-horse narrative. Even so, graphic novel enthusiasts and science-fiction fans alike will enjoy this book, which blends futuristic technology and drama with a classic animal adventure story.