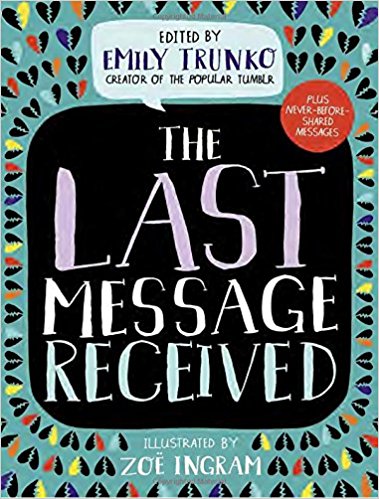 You don’t always remember the first words someone says to you, but you often remember the last. In this book by Emily Trunko and originally inspired by tumblr posts, readers are given a glimpse into over 100 last statements people have said or sent to one another. This is followed by a brief explanation of why this was the last thing the two said to each other; in most situations, there is either a break up or someone has died.

In all cases, the book excels at communicating to the reader the importance and power of words. This poignant message is further emphasized by stressing to readers that you never know what is going to be the last thing said to someone. It does this, as an example, by showcasing sweet things parents have said to their children before unexpectedly passing away. By adding strong graphic illustrations and context to the messages, Trunko takes it from words on a screen to an emotionally charged and thought provoking reading experience. Occasionally the book will steer towards being overly dramatic, but it should be noted this is the exception, not the rule. This is a quick read, but still does what it has set out to do: show the power of words.