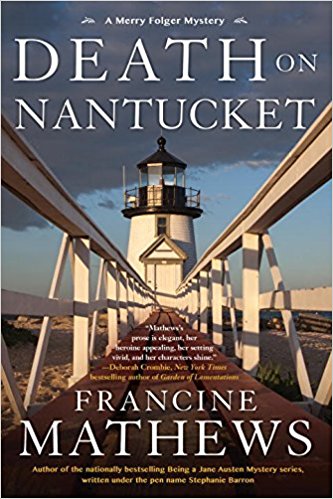 With summer not far away, it’s nice to think about selecting a few good books for your “to-read pile” that you can take the time to enjoy, especially if it happens to be a mystery with a beachfront setting. Francine Mathews’ newest book Death on Nantucket provides a great start for your list for electric, enjoyable pre-summer reading.

While the islanders of Nantucket were bracing for the summer influx of visitors for the Fourth of July weekend, Detective Meredith Folger was trying on her wedding gown for her upcoming marriage to a local cranberry farmer. The large docking ferry would soon discharge hordes of passengers determined to enjoy the sun on the beaches, with the promise of wonderful weather ahead.

Merry was under a directive by the new police chief to make sure that local festivities planned for the entire holiday weekend were not overshadowed by the Nobadeer Beach party, an infamous alcohol celebration attended by non-islander high school and college students. Previous years’ celebrations were trouble, with the chief demanding that she forestall any problems that might occur while keeping up with her regular tasks. Merry could not have anticipated that her day would include a phone call which would deliver some deadly news.

Across town, the house perched on Steps Beach was the home of Spencer Murphy, a famous Vietnam War correspondent who had escaped a prison camp in Southeast Asia. Normally a quiet place with family members visiting, no one was prepared for the discovery of a dead body on the widow’s walk (rooftop) at the top of the house that morning. It was the family dog McTavish that sensed the decomposed body at the top of the stairs. Evidence nearby points to a suicide – or is it murder?

As Merry begins her investigation, the family, friends, and housekeeping staff staying in the historical home called A Step Above all are under scrutiny as the killer. Her major suspect to the crime has dementia, and yet another body is found on the property before the first case is even solved.

Just how far will someone go to protect family secrets or make sure that an incredibly far-reaching lie is not brought to light? Many can profit from the deaths, and Merry scrambles to unravel the Spencer family relationships that seem to have a dark depth to them before anyone else is made a target.

“Death on Nantucket” is a tightly written, enjoyable mystery in the Merry Folger series. The sunny beaches and secondary story lines enhance the race to a surprising and satisfying conclusion. Readalikes would include Louise Penny’s Inspector Armand Gamache, Elizabeth Gunn’s Detective Sarah Burke, and the popular Jessica Fletcher “Murder She Wrote” series by Donald Bain.