Just A Minute A Trickster Tale and Counting Book 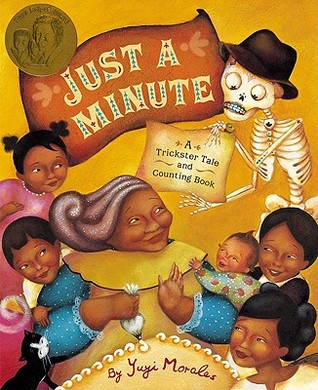 In this trickster tale, author and illustrator Yuri Morales, highlights counting and Grandma Beetle’s cunning as she outwits and befriends Señor Calavera. The illustrations are bold and bright, they reflect Mexican culture, and show in detail Grandma Beetle’s clever plan to elude Señor Calavera.  While the illustrations are bold, there is a warmth that welcomes the reader, just as Grandma Beetle welcomes Señor Calavera to her birthday dinner. The text includes words in both English and Spanish and are featured in a bold font that draws the reader’s eye, while emphasizes that this is a counting story too. This book is a great addition to storytime, and would be fun to read at a classroom visit.