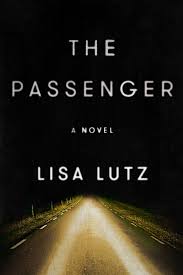 When I found my husband at the bottom of the stairs, I tried to resuscitate him before I ever considered disposing of the body…I pretended to be weighing my options. But there was only one. [p.4]

Quickly assessing the situation, Tanya packs a bag and begins a life on the run. This is the start of Lisa Lutz’s novel The Passenger, a mystery that will keep you guessing until the final pages. At the center of her desperate flight, Tanya experiences a recurring dream as a passenger in a car – more of a nightmare – where she struggles to rewrite the outcome.

A call to a mysterious Mr. Oliver provides Tanya with her first new name, and her journey begins across the country from east coast to west. Seven different times, Tanya makes a chameleon shift to a new name with a slight change in personality, hoping that an unknown killer and her troubled past as a teenager will not surface to harm her. Cues to her break from family and friends is slowly revealed with the emails to a childhood friend named “Ryan” throughout the book.

While on the run, a chance encounter with a bartender named Blue seemed to be a fortunate find and the two similar-looking women decide to switch identities. As the two grow close, Blue shares  a secret which further complicates Tanya’s new life – who will be looking for her now? When Tanya decides to confront her past with the help of Blue, unwelcome surprises await her upon arrival back in her home town. All that remained hidden will now come to light, changing many lives forever.

The Passenger began as a murder mystery but becomes a thriller with the unexpected activities  of the main character, Tanya, as she stumbles in figuring out her future. However, the pace of the action was slower than originally expected,  but still keeps the reader involved in trying to predict an outcome. For a tighter, more on the edge of your seat story with a bite, try The Murder That Never Was by Andrea Kane. Other read a likes for The Passenger would include novels that arrive at their startling conclusions with closely woven detail and strong women characters including The Silent Wife by A.S.A. Harris,  and Susan Crawford’s The Pocket Wife.