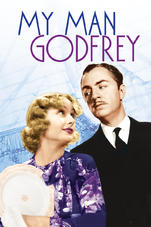 I remember the night I first watched this movie years ago. I had come home and turned on the television, and My Man Godfrey was on a public station. I sat down with my coat on to watch, and was totally transfixed until it ended. I guess I’d never seen anything like it. Although I had watched lots of classic movies, like Hitchcock thrillers and Astaire and Rogers musicals, I didn’t know that such a thing as screwball comedies existed.

In this particular farce masterpiece, William Powell plays Godfrey, the enigmatic butler whose sophistication and commanding presence hint at his true identity. He’s discovered living in the city dump though, and is recruited to work for the Bullocks, a family described by one of their longtime staffers as being more “nutty” than “exacting.” The cast of characters includes the shrill-voiced Mrs. Bullock, usually hung over and in a pixie-seeing haze in the morning, Cornelia, Godfrey’s nemesis, and her sister Irene, hopelessly in love with Godfrey from the start. Then there’s poor Mr. Bullock, the sole voice of reason in the family. Oh and Carlo, Mrs. Bullock’s “protégé,” really a freeloading artist, who becomes melodramatically upset as soon as Mr. Bullock starts talking belt-tightening.

It’s hard to believe that in the midst of all this chaos and frivolity, My Man Godfrey has a deeper aim than to make the audience laugh. There is plenty of social commentary to make the audience think. The tone is set from the start, when Godfrey calls the wealthy people of leisure—who cheered as Irene produced him at their fete to win a scavenger hunt prize—“empty-headed nitwits.” This he follows with the statement that he’s going back to a “society of really important people,” his friends at the city dump.

My Man Godfrey may very well be the best movie you’ve never seen. I remember the night I first watched William Powell as Godfrey and Carole Lombard as the adoring and spirited Irene. Who knows, maybe you will too.