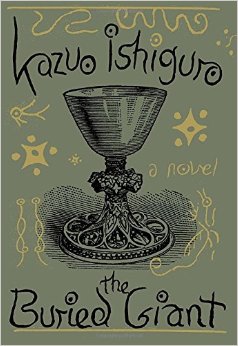 I think The Buried Giant can be described as a novel-length fairy tale, or maybe a better way to describe it is a novel featuring fairy tale elements? I’ll let you decide. A she-dragon, a warrior, and an aging knight of King Arthur are all essential parts of the plot, and yet the relationship between an elderly Briton couple is truly the central part of the story. Axl and Beatrice set out on a dangerous journey to find their son—which sounds straightforward enough—except a mist of mysterious origin has enveloped the land, and it’s devastating effect has been to dim, or altogether eliminate, people’s memories of the past.

Despite only being able to guess where their son has moved to though, the couple sets out alone and on foot across the desolate landscape of an imagined medieval Britain, where King Arthur ruled not long ago, and peace is tenuous after the wars he waged against the Saxons. Fantastical creatures pose a threat as well, and Axl and Beatrice must be prepared to deal with the more commonplace variety like ogres and pixies, and later with the legendary she-dragon, famously enchanted by Merlin and tethered by knights of King Arthur.

As exciting as some of the action is though—including a sword fight between the warrior and the aging, but crafty knight—and curious as some of the mysteries are, I think the greatest joy of this novel can be found in the tender love story of Axl and Beatrice. Their relationship’s history provides the overarching mystery of the novel too, with past hurts remembered in flashes, and only fully revealed at the bittersweet end.

So to get back to the question posed at the start of this review, I think The Buried Giant is closer to being a traditional novel than a very long fairy tale, and I think you would enjoy this book even if you don’t usually read fantasies. And if you’re like me, and you loved reading fairy tales as a kid, then you should definitely give this story a chance!