We have tried to recreate the long history of WPL using newspaper articles and other documents. If you have any details to add, please let us know. We welcome your historical expertise! 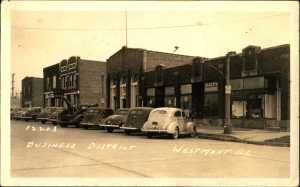 Everett Lincoln Meservey started Westmont’s first library collection by asking residents to pay 25 cents per month to support a library. He went door to door to collect the money along with any books or magazines people wished to donate. Meservey was also the editor and publisher of the first Westmont paper, The Community Press. Meservey opened the new library in the Community Press Building at 22 W. Burlington where it shared space with the newspaper on the northwest corner of Burlington Avenue and Lincoln Street. Meservey did most of the work along with several students from Hinsdale High School who volunteered their time, namely Helen Sanders and Pearl Dudgeon.

Eventually Mr. Meservey moved to Ohio and the books were stored in a room of a portable school. Mr. Meservey died in Ohio in 1939.

The Westmont American Legion became interested in the books and in August 1938 called a meeting of various local organizations in town with the purpose of forming a Library Board and making the books available to the public again. Attendees included C.E. Miller for Westmont’s Lions Club, Pearl Elsing for the P.T.A., Caroline Townsend for the Westmont American Legion Auxiliary, and F.S. Maier for the German American Club.

Money was pledged at the meeting and soon afterwards the Hoffman Building at 209 N. Cass (Cass and Norfolk) was rented and work began to convert the space into a library. Superintendent of Schools and Lions Club member, Mr. C.E. Miller applied for assistance through the W.P.A. (Works Progress Administration) which provided funds, books, and also helped to catalog the books.

The library at 209 N. Cass opened on February 22, 1939 with Mrs. Velma Evans, likely a W.P.A. funded librarian, in charge. Money was tight and the library relied on donations of funds and books from the public and from the W.P.A.

On March 20, 1943 residents of Westmont approved a tax to maintain the library and the first library board of six members was elected, including President and Library Director C.E. Miller, secretary, E. H. Pettey, treasurer, June Goodlow, Caroline Townsend, Pearl Elsin and Caroline Barton. Unfortunately, there was not enough money to pay the bills or to hire a librarian until the 1943 tax money was received in June 1944, so the founding organizations continued their financial support and the women of the board volunteered their time to staff the library two afternoons and two evenings a week.

On August 1, 1944, Grace Townsend was hired as librarian.

The Community Press Building at 22 W. Burlington was remodeled and once again became home to what was now officially called the “Westmont Public Library.”

The first attempt at a bond issue to fund a permanent building for the library failed.

Library Board President Alex Bruno, a Legionnaire, arranged for Westmont American Legion Post 338 to donate land at 37 E. Richmond Street, next to Memorial Park at Richmond and Linden Streets, to be the site of a new library building.

For the second attempt to pass a bond issue, the Library Board members put on a large get out the vote effort including gathering $1.00 contributions in order to fund a full-page ad in the local paper and to buy posters listing the names of the contributors.

Voters passed the bond issue for the new building which would be the Westmont Public Library’s first non-rented home in its 35 years of existence.

Dedication of new 6,500 square foot, $49,000 library at 37 E. Richmond occurred on October 30th with Grace Townsend as Librarian. The Friends of the Westmont Library organization was launched with Mrs. Myron Allen as president.

The Francis S. Maier Children’s Wing was added to the library.

The Board of Directors planned and executed an expansion and remodeling project to utilize the lower level of the existing building.

Due to the increasing need for library services as Westmont expanded, a bond referendum was passed that provided 3.9 million dollars to purchase land and to build a new 28,000 square foot library building (more than three times the size of the current library) to be built at 428 N. Cass. The existing library building at 37 E. Richmond was sold to the Westmont Park District.

Cinco Construction, Inc. of Chicago was awarded a 2.9 million dollar contract on July 19th. A ground-breaking ceremony was held on July 29th and construction on the new building began in September.

State’s Attorney James Ryan announced a grand jury indictment on felony theft charges against Cinco and two of its officers for billing the Library Board $600,000 while failing to pay subcontractors.

The Library Board took out a mortgage with LaSalle Bank of Westmont on September 10 for $975,000 in order to complete the construction.

Paul H. Schwendener, Inc. was hired as general contractor in September to finish the construction of the building. 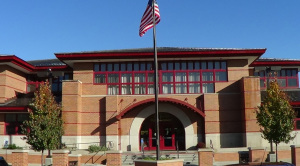 The Library Board settled their lawsuit against Mitchell Kobelinski, guarantor of the building bond issued to contractor Cinco Construction, Inc., for $550,000. Claims pending against other defendants were dropped due to their lack of assets.

Westmont residents passed a referendum that provided funds to purchase additional materials for the collection.

The newly remodeled Children’s Reading Garden was unveiled featuring face out shelving for picture books, updated furniture throughout the department and new computers for young children.

A new roof was installed during the summer months due to severe leaks throughout the building.

The exterior entry plaza was remodeled.

Reserve a study room or a meeting room with your Westmont Public Library card for solo or collaborative work.